Theatre Student Shines in Summer Production of Romeo and Juliet 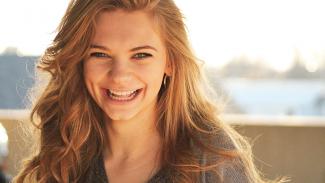 Kat Bates, a theatre student at the South Carolina School of the Arts at Anderson University, is earning rave reviews for her acting talent.

Kat Bates, a sophomore Theatre Design major with a marketing minor, has been building her professional portfolio since high school. She arrived at Anderson University last year with several theatrical productions behind her, eager to dive into the collegiate theatre world.

As a homeschooler in Honea Path, South Carolina, she and her family were involved with several local theatre companies. After attending the South Carolina School of the Arts’ Summer Repertory Theatre, an intensive high school workshop led by AU theatre students, Bates became familiar with the university and knew that Anderson was the right school for her.

“I loved their theatre program because it’s … more intimate than a lot of larger schools, so I get to get a lot of hands-on experience in all the shows and productions they put on,” Bates said. “I wanted to do design instead of acting because I love to create things and have paint all over myself at the end of the day.”

Though Bates’ major is theatre design, she is a talented actress as well. Last August, during her first month as a freshman at AU, Bates auditioned for a rendition of Romeo and Juliet with the Mill Town Players, a community theatre in nearby Pelzer. Bates was chosen for the starring role of Juliet.

Bates said she auditioned on a whim, but the role led her to a much larger stage than she ever expected.

The Mill Town Players put an Appalachian spin on Shakespeare’s Romeo and Juliet by weaving the famous Hatfield and McCoy family feud into the classic plot. The production excelled after debuting in Pelzer. Bates and the Mill Town players embarked on a nearly year-long series of theatre competitions.

Their performance earned them first place at the state and regional levels, and they advanced to compete at the American Association of Community Theatre’s national competition in Gettysburg, Pennsylvania in June.

The award came after months of dedication, as Bates juggled her freshman year of college with an intense rehearsal schedule. She said she spent all day in class then rushed to rehearsal. At times, she spread flashcards across the stage to study while she rehearsed.

“She’s mature beyond her years and is extremely dedicated to her craft,” said Cara Wood, a professor of theatre at Anderson. “What I’m most impressed with is how well rounded she is. Not only is Kat an exceedingly talented actress, but she excels in scenic painting and scenic design as well.”

While Bates was preparing to play Juliet, she was also taking acting classes at AU. The play allowed her to apply the principles she learned in class to her performance. Her professors were also supportive, and they served as a resource to Bates as she learned challenging Shakespearian language—in a country accent.

Though Bates’ national acting award was well-deserved, she was shocked when she heard her name called at the awards ceremony. She was so unsuspecting of the award that she relaxed and slipped her heels off, then had to run onto the stage barefoot to accept her award.

As a sophomore, Bates has many future opportunities in both theatre design and acting at AU.

“While Kat Bates is a gifted actress, she is actually majoring in theatrical design, said Dr. Larson, dean of the South Carolina School of the Arts. “Kat came to the South Carolina School of the Arts with a strong background in prop design. Over the last year, she has broadened her base to include costume and scenic design.  I am excited to see what the future holds for Kat Bates.”