International Day of Women and Girls in Science Profile: ‘Can Do’ Attitude Guides Dr. Cain 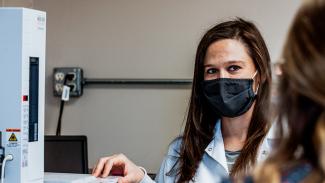 Dr. Lindsey Cain, Chair of Physical Sciences in the Anderson University College of Arts and Sciences, is grateful to have grown up with a “can-do” attitude and an opportunity to cultivate an interest in science early in life.

Women are increasingly entering science-related fields, but are still underrepresented in the big picture.

That's part of the reason International Day of Women and Girls in Science exists. A United Nations initiative, it seeks to highlight the need for gender equality in the sciences.

Dr. Lindsey Cain, chair of Physical Sciences in the Anderson University College of Arts and Sciences, is grateful to have grown up with a “can-do” attitude and an opportunity to cultivate an interest in science early in life.

“I kind of grew up with this attitude of ‘I can do anything the boys can do.’ I played baseball with the boys until I was about 10-years old; I always felt that if they could do it, I could do it,” Dr. Cain said. As a third-grader, Cain remembered Project Challenge, a science initiative that took her beyond what girls her age would normally experience at the time.

“I got to dissect a chicken and had to learn the Periodic Table of the Elements,” Cain said. “I actually had to get in front of the class and they would call out the name of the element and I would tell them the symbol. I had one of the toy microscopes and would go out into the yard and get different samples.”

In high school, Cain developed a love for chemistry and went on to major in the subject in college.

Cain, along with Dr. Joni Criswell and Dr. Jessica Nicks, helps to coordinate “It’s a Girl Thing,” where the College of Arts and Sciences works with Anderson District 5 and McCants Middle School. The grant-funded project aims to attract girls into a STEM field. Cain said that AU science majors would visit McCants Middle sixth-graders to do science activities. Female AU students would work with more than 40 McCants Middle girls, breaking up into groups and performing dissections and other science experiments.

The students would also hear from a guest speaker. One year, she says, the director of PAWS in Anderson came and sparked a lot of interest in veterinary medicine. They also heard from Dr. Nnenna Igwe from the Anderson University Center for Medical Simulations.

“You would expect girls to get grossed out by nasty stuff," Dr. Cain said. "We had some dissection trays set up. They loved that kind of stuff, dissecting a cow eyeball and other animals.”

Because of the COVID-19 pandemic Cain says they were unable to return to McCants Middle, but she hopes to return soon and resume the program.