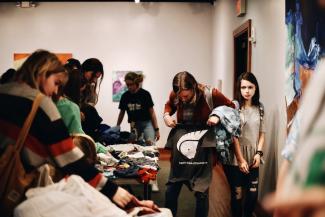 Unfortunately, slavery isn’t just something found in the pages of a history book.

It’s a reality today as much as ever. A group of Anderson University students are working to alter that reality and help human trafficking victims to freedom.

On November 8, approximately 200 people came out to support the Threads event, a pop-up thrift shop set up in Vandiver Gallery at Thrift Library. Anderson IJM raised more than $1,500 to fight human trafficking.

When Caroline Mason was in high school in Budapest, Hungary, she attended an ASCI student leadership conference where she was confronted with a shocking reality.

“I went to a leadership conference where a workshop speaker spoke about sex trafficking and pornography. I was so shocked and burdened by the information and was like ‘there’s no way I can know this and not do anything about it,’” said Mason, a Communication-Public Relations major in the Anderson University College of Arts and Sciences. Mason became involved with Anderson IJM as a freshman and is currently serving as president.

Mason appreciates the outpouring of support during the Threads event and the generous donations of clothing, shoes and accessories from students and faculty and the surrounding community.

IJM is working to eliminate slave trade globally by partnering with local authorities to rescue victims of violence, bring criminals to justice, restore survivors and strengthen justice systems. It takes approximately $6,300 to fully fund one rescue, and making a rescue involves more than just getting victims out of an exploitative environment.

To join the fight against human trafficking, Anderson IJM has a link specific to their chapter to make financial donations. Information about International Justice Mission can be found at ijm.org.