Campus Rallies to Provide Hope for Student Who Nearly Lost Everything
June 17, 2019 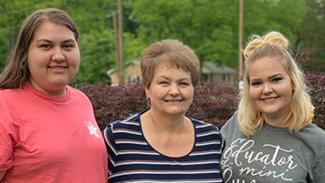 Hope Stelling (left) and her family lost her home in a fire, but the Anderson University campus community rallied to provide things she needed to get back on her feet.

Of all the reasons Hope Stelling chose Anderson University, one of the most important was the close-knit campus community she found.

Little did she know just how valuable that care and support would be.

Hope, a rising senior studying elementary education, received an unexpected call last semester: her family’s home in Williamston, South Carolina burned down in an electrical fire. No one was hurt, but the house was uninhabitable. Almost all of the family’s belongings were gone—her textbooks and study space among them.

Though Hope’s family was thankful that everyone was safe, they faced the hardship of finding somewhere to live intermediately. After the fire, they briefly stayed with a relative, then moved into a hotel.

And that’s when Anderson University’s Christian community sprang into action.

Walker personally delivered the resources that AU donated to the hotel. She also prayed for them, brought them each new Bibles and often called to check in.

“I began to just think of what things I would want done if that were me,” Walker said.

Despite the difficult circumstances, Stelling kept up with her school assignments. She said that her professors were gracious and understanding, and the faculty wanted to serve her—even though they did not have to.

“I genuinely care for all my teachers, and they give it back,” Stelling said. “It’s a mutual relationship of caring.”

Stelling was overwhelmed by the love she received. Across campus, Stelling had multiple people express their prayers for her. She said that it was the little things that mattered the most.

“We’re not just here for the four years, or the 9-to-5,” Walker said. “It’s an all-day, every day, 24/7-kind of place. Even when you graduate, I feel like people are still available to you if you need them.”

Walker often works with students experiencing crises. In those times of need, AU has surrounded students who are hurting and their families with prayer and service. She said that since AU is a community of believers, faculty have a special sense of empathy and seek to be Christ-centered when devastation occurs.

“We try to entwine our hearts with each other and with those students to bring them to a place where they are feeling like they have a safety net, like they have a safe place to be,” Walker said. “It’s being about being rooted here at AU not just for four years, but for a lifetime.”

As Stelling and her family continue through the process of replacing their home, they are thankful for one another and for the portrait of Christian community that AU has shown them during a difficult time.