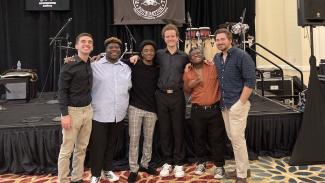 The Jazz Education Network (JEN) annually holds the premier event for collegiate jazz programs from across the nation. Each year, groups from top institutions audition for the privilege to perform on the stage at the JEN annual conference in Orlando, Florida.

Of all who audition, few make the cut.

Dr. Derick Cordoba, director of the Johnny Mann Center for Commercial Music in the South Carolina School of the Arts at Anderson University, knew his students’ audition submission would go up against larger major programs across the nation. With that in mind, he prepared his students for the possibility of not being picked.

But everyone was willing to give it a shot.

Early this year, the jazz fusion combo started rehearsing together and went into the Anderson University Music Media Studio to record half a dozen songs—three with vocals and three that were purely instrumental.

Around the start of the academic year, they got the news that they were in.

Soon after arriving at the conference, Dr. Cordoba and the group hit the ground running. He said January 5 “was a non-stop day for both me and the students. Soundcheck, booth setup, performance, post show load out, recap meeting, booth opening, food in there somewhere, etc.”

All that hard work paid off.

“The students did an incredible job! We started with a light crowd and by the end we had a solid crowd,” Dr. Cordoba said. “The students played extraordinarily well! The crowd was going crazy yelling and clapping. The band was up there having the time of their life connecting with each other and the crowd. In seven straight years of attending this conference I have never seen a student group get the kind of reaction they got.”

Some faculty from major programs in the nation praised the Anderson University group  for their musical performance and also the professionalism they demonstrated on stage.

“High school and college students literally rushed the stage after to speak to the students and were asking ‘where is Anderson University!’ During the show, people were texting their friends to get over here and listen to this group,” Dr. Cordoba said.

The combo also accompanied Dr. Cordoba at the South Carolina School of the Arts booth during the JEN conference. Dr. Cordoba said the conference was a great opportunity to go to clinics and workshops led by some of jazz music’s leading professionals. 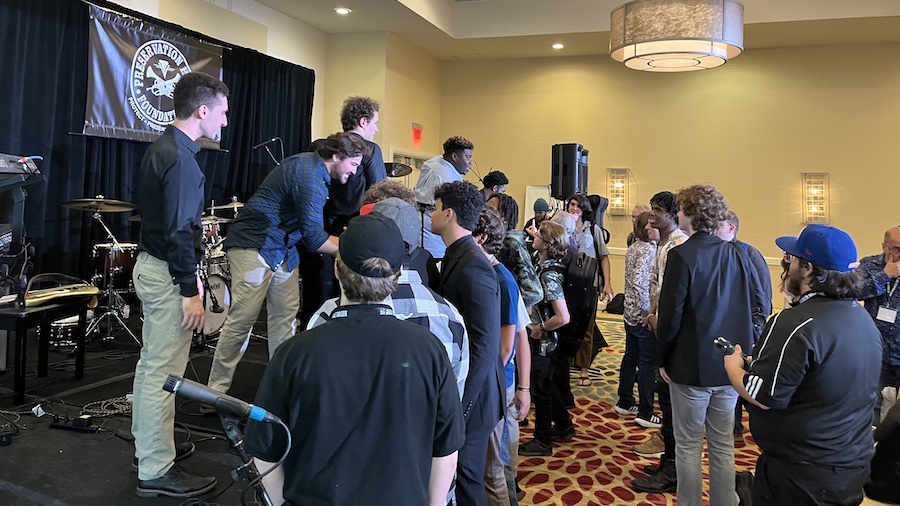 “The visibility potential for our Commercial Music program is very strong,” said South Carolina School of the Arts Dean Dr. David Larson. “I met with them briefly when I was visiting family in Coral Gables last Monday. I had the chance to encourage them and pray for their safe travel and an excellent performance.”