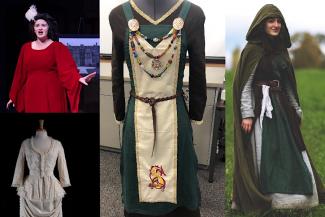 The award-winning designs of Alessa Gibbons, a Theatrical Design major in the South Carolina School of the Arts at Anderson University, add to the spectacle of Theatre and Dance productions. She’s also a seamstress for Fell & Fair Productions. That’s Gibbons pictured above right as a ranger. (Fell & Fair photo by Nicholas Bruno)

Alessa Gibbons of the South Carolina School of the Arts at Anderson University has an eye for what makes a production visually “pop.”

As students study the characters they’re playing and memorize their lines, Gibbons, a Theatrical Design major, is planning out what they’ll wear.

Designing costumes is a fun challenge for Gibbons, a sophomore from Utah. Gibbons will start work on a production studying each character, then making sketches and thinking about what’s needed to complete a costume.

“It starts with reading a script and getting to know the characters,” Gibbons says. “If there are any direct things in the script that describe what someone’s wearing—some things are really specific and some you have to kind of make up.” Some costumes Gibbons makes from scratch, while others may involve digging through the School of the Arts’ existing costumes and deciding on modifications. She and Professor Jessica Johnson and shop supervisor Cheryl Whitley often take road trips to fabric warehouses in Commerce, Georgia, or nearby Williamston, South Carolina, to find material to achieve the right look for a production.

Costume design is something Gibbons has enjoyed ever since she was a kid. When she was in elementary school, Gibbons started making dresses for her dolls, using paper, tape and markers.

“It just kind of grew and I learned more techniques; I was self-taught; I figured things out,” said Gibbons. When her grandmother taught her to sew, Gibbons’ love for making clothes and costumes grew.

“Eventually it just grew and grew and I enjoyed it more and more and started taking classes in school,” Gibbons said. “I made a lot of costumes for myself or family members for Halloween and helped with shows on the side.”

While in high school, Gibbons received a gold medal at the FCCLA (Family, Career and Community Leaders of America) Regionals and qualified for nationals, attaining eighth-place for her design of a Viking costume. By her junior year of high school, Gibbons decided costume design could be more than just a hobby. She began seeking out colleges and universities across the country with Theatrical Design.

“I signed up for a college search and then found Anderson, toured it and it felt right,” Gibbons said. “I love how tight-knit the community is. It’s not super big… you get to know everyone.”

Gibbons’ creations range from Lettice Douffet’s red dress (Lettice and Lovage) to Dot’s full Victorian dress, complete with bustle and corset (Sunday in the Park with George). And she’s picked up some awards along the way, most recently becoming a costume crafts nominee for the Kennedy Center American College Theater Festival (KCACTF) for her Lettice Douffet dress design.

Of course, the costume designer’s job doesn’t end when the curtain rises.

Gibbons recalled how many of the costumes for “Sunday in the Park with George” were made from scratch. Sometimes things don’t come together as planned, and a costume needs a last minute rescue for something like a zipper.

“We had to figure out how to close the front because we didn’t get the right zipper for it,” Gibbons said. “Everyone’s running around. People are needing to get dressed. So we found Velcro and slapped it on. Later we found a zipper and replaced it.”

Gibbons’ favorite tools are her sewing machine and serger. She also has her favorite and least favorite materials to work with. A pet peeve is any fabric that’s stretchy or slippery.

“Stretchy material will just bunch up weird; if it’s slippery, it will just slide out of place when you’re trying to sew it,” Gibbons said. “The best to work with are cottons, linens--natural fabrics that don't move a lot.” Her latest project is to create tutus for an upcoming dance concert.

Gibbons also works as a seamstress for Fell & Fair, a costume design company in Taylors, South Carolina, devoted to medieval and fantasy costumes, as well as armor and weaponry. Her creations, which include cloaks, tunics and dresses, are worn for Fell & Fair’s film productions or sold through their shop. She also takes part in Fell & Fair events as a ranger, wearing a multi-layered outfit she designed.

Gibbons is a huge fan of designers Tricia Biggar (Star Wars) and Jaqueline West (Dune) and identifies the most with period and fantasy themes.

She loves her work with Fell & Fair and hopes someday to design her costumes for film productions.