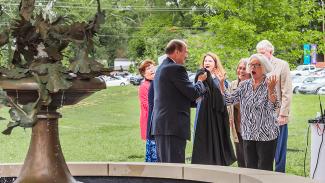 World-renowned sculptor Sandy Scott reacts to the official unveiling of the Anderson University Fountain of Peace during a dedication ceremony on Oct. 14, 2019.

Anderson University officials today dedicated the Fountain of Peace, an installation from world-renowned sculptor Sandy Scott, during a ceremony unveiling the latest addition to the University’s growing collection of art.

“This amazing, beautiful gift is here to remind us of the opportunity we have to be instruments of peace in this world,” said Anderson University President Evans P. Whitaker. “We are humbled to have this fountain as part of the ever-increasing beauty of inspiration on our campus.”

Scott’s fountain and bronze sculpture was created in 1985, and is one of just five existing “Fountain of Peace” pieces worldwide. Each are unique but were created with a single mold, which has since been destroyed, Scott said. Others were installed at Brookgreen Gardens in Murrell’s Inlet, South Carolina; at the United States Military Academy in West Point; and at locations in San Antonio, Texas and Santa Fe, New Mexico.

“I cannot think of a better place for my art than Anderson University,” Scott said. “I am simply overwhelmed by this reception. Just to know it’s here, on this beautiful campus, is a highlight of my career.”

The Anderson University Fountain of Peace was acquired as a gift from Mr. and Mrs. Robert Rainey and Mr. and Mrs. John Miller, long-time friends of the University who attended Tuesday’s dedication.

Scott is recognized as one of America’s premier animal sculptors. Her career began as an etcher in the 1970s before she began focusing on wildlife sculpture in the early 1980s. She maintains studios in Lander, Wyoming; Lake of the Woods in Ontario, Canada; and in Colorado. Her work also can be found at the National Museum of Wildlife Art in Jackson, Wyoming and at the William J. Clinton Presidential Library and Museum in Little Rock, Arkansas.