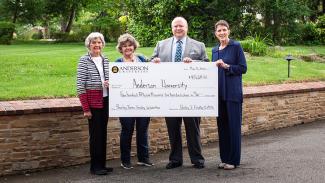 Jane Locke and Vicki Grant, administrators and friends of the Shirley James Findley Estate, presented a check for $456,611.51 to support student scholarships at Anderson University.

The estate of a cherished member of the Anderson University family provided more than $450,000 to support AU students with financial need, academic promise and high moral character.

This month, the Shirley James Findley Estate provided a new gift to the endowed scholarship, with administrators presenting a check of $456,611.51 to Anderson University President Evans Whitaker and Anderson University Associate Vice President of Philanthropy and Estate Planning Johnna Shirley.

After graduation, Findley worked for 31 years as a claims examiner for the Social Security Administration. She attended First Baptist Church in Anderson and served on the Anderson University Alumni Board from 1999 until 2002. She was preceded in death by her husband, Walton “Roger” Findley, in 2014.

With the end of the fiscal year approaching, Anderson University appreciates the generous gift from all members of its campus community. In addition to established avenues of giving, the Office of Development has established the Anderson University COVID-19 Relief Fund in an effort to remove financial obstacles and uncertainty that may hinder our students’ academic success. Options of support can be found here.