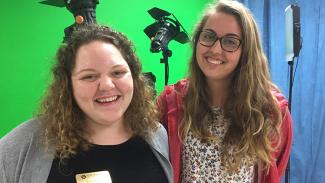 Film students at Anderson University are once again proving to be among the best in the business.

For the second year in a row, AU students won honors at WorldFest Houston, the country’s oldest international film festival, bringing home a silver prize this year after winning bronze in 2018.

Gold next year? Professor Gorman Woodfin certainly hopes so, and he has plenty of reason for optimism.

WorldFest Houston this year had more than 4,500 entries from 75 different countries. It is the film festival that launched the careers of some of Hollywood’s most prestigious filmmakers; Steven Spielberg and George Lucas are both former WorldFest Houston award-winners.

Anderson students Kayla Bowers and Rachel Tabor won the Silver Remi Award for their short film “The Record,” a piece produced as part of Woodfin’s documentary video production course. Woodfin was on hand to receive the award at WorldFest Houston earlier this month.

“It is exciting to see AU win for the second year at WorldFest Houston,” Woodfin said. “Kayla and Rachel are two amazingly creative and passionate artists who produced a professional and powerful film. That our students continue to win on an international and well-respected platform like WorldFest Houston speaks volumes about the program Dean Wayne Cox and the entire team at the College of Arts and Sciences is building.”

“But most importantly, I’m just so proud of my students and what they continue to accomplish,” Woodfin said.