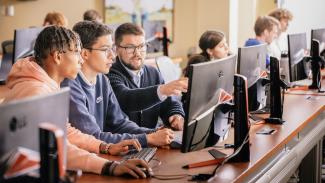 Center for Cybersecurity professor Brandon Grech, third from left, works with students in the cybersecurity lab. Hands-on experiences in these labs are a factor in the students' outstanding competition performances.

Students from the Anderson University Center for Cybersecurity posted impressive team and individual performances in the NCL Games, the National Cyber League’s Fall 2022 competition. They competed in a field of more than a thousand teams overall from across the nation.

According to Cybersecurity Professor Brandon Grech, Anderson University is ranked No. 45 in the nation, putting them in the NCL Power Rankings.

According to Center for Cybersecurity Director Dr. Kenneth Knapp, this competition involved the largest number of Anderson University students to date: five teams of six to seven cybersecurity students each, for a total of 33—more than double the students competing in the last competition.

The team AU_PHISH3RSOFM3N was ranked number 80, putting them within the Top 100 with a ranking of 80 and within the top eight percent: Axel Zublena, Aaron McCurry, Camden Sloan, Zachary Lee, Kyle Beauregard, Patrick (Will) Bratten and Charlie Paddock.

Seth Taylor feels blessed to have represented Anderson University in the NCL Games.

“I am extremely humbled and thankful to be a part of NCL and represent Anderson University. Being with my amazing team everyday of the competition and supporting each other helped me achieve new personal goals; and of course all of this could not have been done without my amazing teachers Dr. Kenneth Knapp and Dr. Brandon Grech,” Taylor said.

When Eric Watkins entered the Cybersecurity degree program as a freshman, he wanted to learn everything he could, and knew the CTF (Capture the Flag) was something he wanted to be a part of. Preparation that included a practice site set up by Dr. Grech helped Watkins and others gain confidence and become equipped with the tools he needed to compete in the competition.

“Every day of the NCL Team Game, we got together and worked together on progressing in the competition. Typically, we would each work on our own laptops and comment if we found a lead on solving a challenge,” Watkins said. “Above all we made sure to have fun, which ranged from spontaneous milkshake runs to staying up till 3 a.m. watching movies together.”

The NCL Games offer students a variety of challenges to test their cybersecurity skills in areas that include identifying hackers, auditing vulnerable websites and recovering from ransomware attacks.

The Anderson University Center for Cybersecurity trains students to meet the unique demands of today’s cybersecurity industry. Degree tracks focus on cybersecurity with   specializations in analytics, criminal justice, or mathematics. Details can be found online.

The complete results of the fall 2022 rankings can be found online.