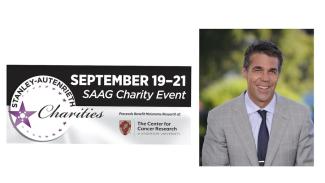 An exciting two days are planned in September, raising funds that will benefit the melanoma research of The Center for Cancer Research at Anderson University.

Carolina Auto Auction, part of the Stanley Autenrieth Auction Group (SAAG) and Stanley-Autenrieth Charities, are organizing the event to benefit the center. According to Scott Whitaker, marketing manager for Carolina Auto Auction and organizer for the event, the idea of a cancer fundraiser originated after the owner was diagnosed with cancer. Being an auctioneer, his voice was the tool of his trade—completely lost because of a melanoma. This is the fifth year for the charity event, and this year proceeds from the event will benefit the Anderson University Center for Cancer Research.

On Monday, September 19 at 6 p.m., the Legacy Gala and VIP Charity Auction will take place at Bleckley Station in downtown Anderson. The gala’s highlight is a chance to meet ESPN Commentator Chris Fowler, who will be the keynote speaker of the dinner. Fowler, among the most respected hosts and play-by-play commentators in television, is known for hosting Monday Night Football and as the former host of College GameDay, ESPN’s Emmy winning Saturday morning college football preview show, along with numerous other top programs that include ESPN’s SportsCenter.

Tickets for the dinner are $125 individually, and whole tables can be purchased as well.

On Tuesday, September 20, starting at 11 a.m., golfers are invited to “Tee Off Against Cancer,” a golf tournament taking place at Cobb’s Glenn Country Club in Anderson. The captain’s choice tournament is open to individual players and teams and will offer a variety of prizes to players, plus a free steak sandwich lunch for all players.

The tournament fee is $150 for individual players.

Both events will have a silent auction, and there will be a live auction at the dinner with more than 150 items being offered. Prizes range from Green Egg grills to Hilton Head vacations.

For the past four years, SAAG charity events have raised $660,000 for cancer related nonprofits. According to Scott Whitaker, the fundraising goal for the 2022 event is $50,000. He said that Carolina Auto Auctions has a good relationship with Anderson University and feels it’s important to keep more of the funds local. That said, he hopes to exceed that amount and pursue regular fundraising for the center.

The Center for Cancer Research at Anderson University is dedicated to the study of cancer treatments and causes, all with a focus on community outreach and education.

To buy tickets for this event, text CAALegacy 2022 to 76278. Online registration is available at CAALegacy2022.givesmart.com or you can call Tiffany Gates at Carolina Auto Auction at 864-231-7000.