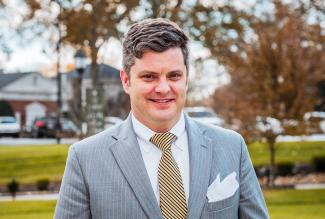 The Reverend Dr. Wesley Brashier, has announced that he will step away from his Anderson University role to become President of Hope Road Properties, effective June 30.

After five years of sterling service as Vice President for Christian Life and Senior Campus Pastor, the Reverend Dr. Wesley Brashier, has announced that he will step away from his Anderson University role to become President of Hope Road Properties, effective June 30.

At the announcement, University President, Dr. Evans Whitaker, said “We are very sad to see Dr. Brashier leave his role, because he is beloved at AU, and yet we are excited for him as he begins a new chapter in his professional life as head of his own real estate development company. Wes has made significant contributions to the spiritual life of the University that have impacted both students and employees. He has served faithfully as a member of our Senior Leadership Team, giving general leadership to the institution’s health and advancement and always offering a healthy dose of good nature and humor. He will be greatly missed.”

Brashier, a recent graduate of AU’s Clamp Divinity School, where he earned the Doctor of Ministry degree, led the Campus Ministries division, including Baptist Campus Ministries, women’s ministries and missions. He led official campus devotions and ceremonial prayers at various events throughout the perennial academic year. He also personally led the production and accountability of the University’s weekly worship service (Chapel). He worked closely with other campus ministries, including Reformed University Fellowship, Cru, and Fellowship of Christian Athletes to support and enable their outreach ministries to the campus. Through chapel, student Bible studies and personal interactions during his ministry to the campus, hundreds of students have accepted Jesus Christ as Lord and Savior and have participated in North American and international missions.

Being both a minister and an entrepreneur at heart, Brashier partnered with Dr. James Duncan, Professor of Communication, to pioneer the first commercial chapel attendance app called iAttended. The breakthrough technology makes it possible for institutions to track chapel attendance instantaneously by registering the student via a student-initiated electronic scan. The app is also applicable to other organizational events and meetings. The solution has made it possible for students to no longer have to stand in line to wait to have their identification cards scanned by a second party. Students waive their phone or other mobile device at the scanner as they exit the doors of the event venue and are able to proceed to their next campus obligation without delay. In addition to Anderson University, a total of 31 colleges and universities have adopted iAttended including Lipscomb University (TN), Samford University (AL), Mississippi College (MS), and George Fox University (OR).

During Brashier’s tenure, he saw the University’s acquisition of a new, unique home for Campus Ministries. Made possible through a major gift from his grandparents, Dr. T. Walter and Christine Brashier, the University acquired four acres and a classic mid-century home on Kingsley Road that has been converted into offices and meeting spaces for campus ministry staff and student ministries. The property, named Brashier Glade, includes an open area beyond a grove of mature oak and pine trees. Walter’s Garden, a serene natural pathway leading up to the building is named in memory of Dr. T. Walter Brashier. Christine’s Meadow, an expansive grassed area for student gatherings and activities, is named in honor of Christine Brashier, who attended and received her diploma from Anderson. It is the largest known compound in the nation specifically for campus ministries.

Brashier is not unfamiliar to the real estate industry. With family roots steeped in real estate entrepreneurial, he left real estate development in 2006 to start his active ministry serving on the staff of Berea Baptist Church in Greenville, South Carolina. He then moved on to North Greenville University in 2013 where he was Assistant Director of Baptist Campus Ministries. In 2016, he joined the Anderson University administration.

He received his bachelor’s degree from the Citadel, The Military College of South Carolina. He was ordained to the ministry by Scenic Hills Baptist Church in Traveler’s Rest in 2010.

In his new work, Brashier will develop properties and construct facilities for both residential and commercial applications, in which he has many years of experience prior to entering ministry.

In making the announcement, Brashier said, “The opportunity and privilege to serve Anderson in this role has been the highlight of my professional and ministry career. Anderson holds a very special place in my heart – now and forever more. I will miss many things about being on the campus every day, especially seeing the students, faculty and staff. God has blessed AU’s Christian educational mission and I know first-hand that Anderson is an authentic Christian university. I look forward to frequent visits and will watch as God reveals his ongoing plan for this powerful institution. Long Live Anderson. #True to AU!”

“Wes Brashier has been a treasure to our campus. His contributions are many, and his presence on our campus has been a joy for all who know him. He came at exactly the right time to nurture our Christ-centered campus culture. Now, we trust that the Lord will continue to bless him and his wonderful family as he steps out on faith to follow the Lord in this most exciting new venture,” Whitaker said.

Anderson University is a “more selective“ comprehensive Christian university offering bachelor’s, master’s and doctoral degrees on campus and online. Anderson University is among US News and World Report’s “Best Regional Universities South,” and is on the publication’s “Most Innovative,” “Best Value,” “Best Undergraduate Teaching,” “Top Performer: Social Mobility” and “Best Online Programs” lists. Anderson also is ranked #26 nationally for Student Engagement by the Wall Street Journal/Times Higher Education; is a “Best College” among institutions of higher learning in the southeast by The Princeton Review; and is a three-time Apple Distinguished School.