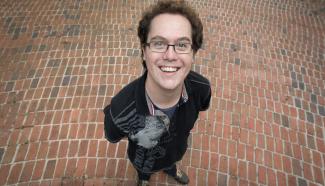 Dorien Gunnels, who studied graphic design at the Anderson University , is a lighting artist with DreamWorks.

Few people can say with any certainty that they knew what career they wanted to enter when they were nine years old.

That’s how old Dorien Gunnels was when he saw the animated feature “Toy Story” for the first time at his local cinema, setting him on a trajectory towards playing key production roles in many top computer animated movies.

Gunnels, whose parents operated a videography business, remembers setting up clay figures and shooting stop-motion animation with a large VHS camcorder. He admits that the results were rough, but adds that he was fascinated by the process of making inanimate objects come alive.

“On TV they were still playing Gumby and Wallace and Gromit – that kind of stuff. I loved it. My first animation was this little tiny duck swimming around a pond,” Gunnels recalls. “Now it looks really dated, but back then it was like ‘they’re moving around and telling a story!’”

In the fourth-grade, Gunnels and his classmates had an assignment to write a letter to their future self.

“I actually wrote that I wanted to be a 3D animator at Pixar and had no idea what that actually meant. I wanted to do it but it was a ‘pie in the sky’ dream,” Gunnels said. “I had no idea how to make that happen.”

Gunnels, an Anderson, S.C., native, is currently working for NBC Universal on loan to DreamWorks Animation. During the pandemic, his work setting isn’t unlike that of millions who have set up workspaces at home for their jobs.

“Like a lot of people, I’m doing the working from home thing. The reality is my toolset is a computer sitting in front of me and the rest of it is technology on the backend.”

As a lighting artist, Gunnels has worked in features that include “Onward,” “Coco,” “Incredibles 2,” “How to Train Your Dragon 2,” “Megamind,” “Mr. Peabody and Sherman,” “Madagascar 3: Europe’s Most Wanted” and “Storks.” He’s currently working on “The Bad Guys” for DreamWorks.

Gunnels’ career started at DreamWorks, then he went on to work for Sony Pictures, Blue Sky and Pixar, then returning to DreamWorks.

“If you map the whole thing, it's a palindrome of a career,” Gunnels quips of his recent return to DreamWorks. He also feels blessed to have gotten to know professional artists he admired over the years.

“You’re arguably surrounded by this top talent in this industry – people you’ve read about when you were in school, like that guy who sits two seats down from me now. It’s crazy. When I went to Pixar, one of the guys he did these old lighting tutorials – I used to buy the DVDs, watched religiously – he sat literally two offices down from me. He’s a really cool dude. It’s kind of surreal to think about it,” Gunnels said.

“The reason I chose lighting as my specialty is I love to paint,” said Gunnels, who studied graphic design and also studied painting and drawing at Anderson University. “Through the graphic design side I got more into photography. A lot of the graphic design assignments were actually going out and photographing graphic design in the wild; That inspired more of a photography bug in me. Those things immediately translated what I started learning in computer graphics. I don’t enjoy modeling or texturing; they’re all necessary and I can do them, but I don’t enjoy them as much as when I’m sitting just painting light into a scene. That’s what really fascinates me.”

Eric Whitlock, one of Gunnell’s professors at AU, recalled how he quickly grasped a web design assignment.

“I thought there was a lot more under the hood,” said Whitlock, who was captivated by Gunnels’ easing into mastering web design and Adobe creative software. Whitlock noted that Gunnels’ classmates were reaching out to him for help with the programs.

“He had raw talent that was just uncommon. He amazed me how quickly he moved into these large productions and Pixar; these are places some students only dream of getting into.”

At Anderson University, Gunnels learned the essential value of having a good eye. He appreciates the constructive criticism he received from Whitlock, professor Jane Dorn and other faculty.

“What I got from AU is the foundation of what makes a pleasing image. All the concepts, color theory and composition -- every art school is going to try to teach you this, but AU definitely hit that home for me,” Gunnels said.

Beyond simply having luck, Gunnels urges anyone aspiring to work in animated features or anything related is to do whatever they can to “tilt the odds in their favor.” On the technical end, He encourages individuals to learn about gaming software, which, in addition to their use in the exponentially-expanding gaming industry, is also finding its way into movies with computer-generated graphics. He notes that companies are increasingly looking for experience in Unreal or Unity, top programs used by game developers.

Gunnels stresses the importance of “developing the skills you need (and tracking industry trends to identify what skills you may need in the future), putting together a solid demo reel (for students, that can be personal and independent film projects), putting your work in front of more eyes and building out a solid network of industry friends and mentors.”

He adds, “Your classmates today may be your colleagues in the future! Just like in real estate, location matters for jobs. Look at where the projects you want to work on are being created, and figure out how to get yourself to that location, or be ready to move on short notice if you get an offer.”

“There are a lot of rockets going up to the stars, so try to be the one that lands on the moon,” Gunnels said. “Surrounding yourself by other people who are just as passionate helps keep that drive, and I definitely had that at AU.”

Gunnels also lends his talents to others who are working on independent (Indy) projects. And when he’s not working on an animation project, he enjoys playing music. Gunnels started playing guitar in high school and now enjoys making music on his synthesizers.

“It used to be a lot of rock, but it’s now ambient stuff. Working in this industry there’s a lot of pressure, a lot of deadlines. As you’re listening even to white noise, it’s pretty therapeutic,” Gunnels said.

Gunnels and his wife are currently living in Vancouver, Canada, where he now looks forward to spending time with their newborn son.

“For the first time I’m not thinking directly about the career,” said Gunnels, who enjoys playing the role of dad.

Samples of Dorien's work can be found on his website.