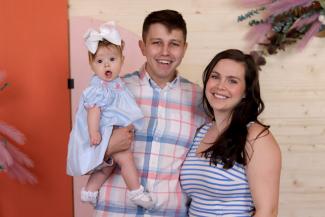 Dr. Chandler Hash, pictured with his wife and daughter, looks back on his years at Anderson University as formative ones.

Dr. Chandler Hash, a graduate of the Doctor of Nursing Practice (DNP) program at the Anderson University College of Health Professions, looks back on his years at Anderson and feels they were formative ones.

Hash, a nurse practitioner for CVS Minute Clinic, was at first majoring in Kinesiology when he started at Anderson in 2011. Although he came to feel his future wasn’t in physical therapy, he knew he wanted to help people in some way.

“I always appreciated the sciences; I thought they were super interesting. At that time Anderson was starting the nursing program,” Hash said. “In my junior year I started doing my prereqs. There’s so much that you can do in the field of nursing, so that was attractive to me too and I like just having options to do different things.”

Hash feels that smaller class sizes helped him to succeed in his studies. Also, having open communication with his professors, whose instruction is based on their own real-life experiences, made a lasting impact.

“They were in the field and working, so I was able to pick their brain and just see what the day to day was,” Hash said. “Having that access to the professors who are very knowledgeable and still working as bedside nurses was huge. Even going from the BSN to the DNP program was the same thing.”

A student-athlete, Hash originally considered Anderson University when he received a recruiting offer to play on the Trojans Men’s Basketball Team. Instead, he went to play Division 1 basketball at another institution. He felt the Lord was convicting him of his pride and, talking to then-coach Jason Taylor at Anderson University, he finally made the decision to become a Trojan.

“After I got my release to visit other schools and talk to coaches, I just remember I did a campus tour and was blown away by their commitment to the Gospel and Jesus,” Hash said. “The evidence of Christ in how they were speaking about Anderson and just the environment… there’s no question I was going to go there.”

As he was working through the accelerated nursing program at Anderson, Hash’s professors encouraged him to further his studies in a new Doctor of Nursing Practice (DNP) program.

“I was in the first BSN to DNP class and so they’re always willing to take suggestions. That commitment to excellence I respected so much from Anderson,” Hash said.

When Hash graduated and was seeking job opportunities, he began working for CVS Pharmacy doing COVID-19 testing when, through a regional manager, he got a job working at Minute Clinics in various Upstate locations; then was placed permanently in Boiling Springs, South Carolina.

“It's been a good place to start out and learn and grow. You run your clinic. You’re typically the only nurse practitioner there. We do it all. We’re the nurse, the secretary, and the nurse practitioner all in one. It’s a stretch for me starting out,” Hash said.

While for most people visiting the Minute Clinic is a one time thing, Hash is gratified when someone returns.

“Just seeing the same people and for them entrusting themselves or even their children in your care. Sometimes it’s difficult for them to get into their primary care provider or pediatrician, so I think that’s been the most gratifying,” Hash said.

“I feel like I’m in a phase of wanting to learn and solidify my skills as a nurse practitioner,” Hash said. “I never want to stop learning. There’s something new you learn every day.”