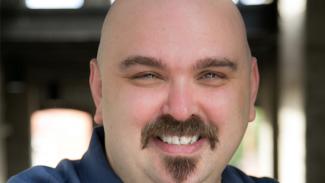 Dr. David Sollish is the newest professor of the South Carolina School of the Arts Musical Theatre program.

In August, Dr. Sollish became the newest professor of the South Carolina School of the Arts’ Musical Theatre program.

Dr. Sollish brings a lifelong love of the arts, years of professional experience and academic expertise to Anderson.

He holds a Bachelor of Arts in Acting, Directing and Puppetry with a minor in vocal performance from West Virginia University; a Master of Arts in Theatre History from Illinois State University; and a Ph.D. in Musical Theatre Direction and Arts Administration from Bowling Green State University. He began his professional career in acting at just seven-years old, and he continues to work professionally as a director.

Before coming to AU, Dr. Sollish taught at Blackburn College and Waldorf University. Most recently, he spent four years at Belhaven University, where he served as chair of their theatre department.

When the position at AU opened, Dr. Sollish felt the Lord leading him on a new journey. His experience and industry knowledge made him the perfect pick for the South Carolina School of the Arts.

“I think we already have a great foundation here that has preceded me for many, many years,” Dr. Sollish said. “I want to continue that awesome tradition of great education and strong performance and production, but also I want to help us move into the next era.”

He said he is looking forward to not only training students to act and compete well but also to be a light in the theatre world. He said a Christian perspective is vital to AU’s mission.

Dr. Sollish has always viewed the South Carolina School of the Arts at Anderson University as a beacon on the hill, leading the way in the arts as one of the top theatre departments in the country. He said the national accreditation the college received last year is the cherry on top.

“It means that we meet the highest standards in everything that we do from our classes to our productions to our mentorship and advising,” he said.

Dr. Sollish is settling into his new role, and he is excited about the future of the South Carolina School of the Arts. “Curtains” in October will be his first directing debut at AU.

His wife is also working at AU, and they are both passionate about theatre and plan to enjoy the arts community in the Anderson area. Outside of work, they enjoy traveling, baseball and hockey, singing at church and spending time with their dog Lucy.