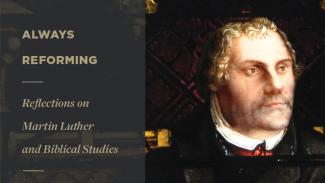 What does Martin Luther, the man who ushered in the Reformation more than 500 years ago, have to say to 21st Century Evangelical Christians?

Plenty, according to Dr. Channing L. Crisler, associate professor in the Anderson University College of Christian Studies and the Clamp Divinity School. Crisler is an author of the book Always Reforming: Reflections on Martin Luther and Biblical Studies, published by Lexham Press.

“I think that Luther is timely for the days we live in because he lived during a lot of political unrest and he lived during a lot of disease from the plague, so there are a lot of parallels between his setting and our setting today,” Dr. Crisler said. He co-authored the book with Dr. Robert L. Plummer, Collin and Evelyn Aikman Professor of Biblical Studies at The Southern Baptist Theological Seminary.

In this volume, leading Baptist, Lutheran and Reformed scholars explore Martin Luther as an interpreter of Scripture. Central themes of Luther’s approach to scripture are explored through the lens of contemporary dialogue, suggesting how he might reform biblical studies in these times.

“In academic circles and biblical studies, Martin Luther has in some ways been kind of shunned and criticized and not really taken seriously, so what Rob and I were trying to do was to demonstrate in some clear and practical ways that some of the insights and some of the ways that Luther approached the Bible and the reasons for which he approached the Bible can still inform scholars, pastors and the church today,” Dr. Crisler said.

Dr. Crisler also authored Reading Romans as a Lament: Paul’s Use of Old Testament Lament in His Most Famous Letterand Echoes of Lament and the Christology of Luke.

Always Reforming: Reflections on Martin Luther and Biblical Studiesis published by Lexham Press. Details are available from its website.