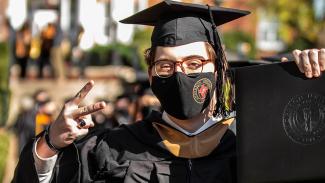 Commencement ceremonies at Anderson University take place May 7 and 8, adding more than 800 students to the ranks of Trojan alumni.

Anderson University is honoring the accomplishments of its graduates in two commencement exercises taking place on the historic Alumni Lawn, May 7 and 8, 2021.

It goes without saying that every graduating senior has a special story to tell.

Among them are Autumn Donnelly, who will graduate with her English degree. Donnelly lost her father when she was 12 and became something of a second parent to her younger siblings.

“I pretty much ended up skipping through the teenage phase and went straight to an adult mindset,” said Donnelly, who literally worked her way through college. Donnelly served as a resident assistant and has been working at the David Larson McPhillips Center for Student Success at Anderson University. She was also involved with Baptist Collegiate Ministries (BCM) and went on a mission trip to London as a student, a pivotal experience that taught her that the Lord can use anyone in ministry. Donnelly has always loved reading and would like to be an author of Christian fiction or nonfiction, and possibly pursue church-related work.

“My most cherished memory is just the people and the community. I’ve never not felt loved by people here,” Donnelly said. “I’ve always felt a sense of acceptance and a sense of love and people wanting to get to know me, to build a relationship with me and—especially as Christ-followers, people pouring into you spiritually and wanting to know about your walk with God.”

A couple of weeks after receiving his Clinical Psychology degree, Jacob Weaver of Pendleton, South Carolina, is headed to Washington, D.C. to take prerequisite courses at American University for entering medical school to study neurosurgery. When he was in high school, Weaver became inspired by reading the biography of Dr. Ben Carson, a noted neurosurgeon and former U.S. Secretary of Housing and Urban Development. While at Anderson University, Weaver grew in his faith, becoming a Christian. Among his professors he admires is Dr. Patty Slaughter, professor of psychology and chair of the Department of Behavioral Sciences, for her wise guidance as he was learning more about himself; also Dr. Robert Franklin, associate professor of psychology, for helping him discover Neuroscience.

“Those two professors… the things I know I’ll remember 50 years from now, those are two people I will look back at and say they directed me in the way I’m now going,” Weaver said.

Morgan Franklin of Columbia, South Carolina, completed requirements for her Biochemistry degree in only three years. After graduation, she plans to marry and enter pharmacy school.

“I think coming here allowed me to overcome the stressful environment of pursuing a biochemistry degree in three years,” Franklin said. “It’s been a lot, but I feel I have grown so much as a person just by being here.”

Although the past three years have been full ones for Franklin, she says she’ll look back on her involvement with Student Activities and fun events she helped to plan, as well as simpler things such as sitting on the front lawn or the student center patio with friends.

Dr. Beatrice R. Thompson is a retired educator from Anderson School District Five and the first African American to serve on Anderson’s City Council. She has served in this capacity since 1976. Dr. Thompson serves as Executive Director of the Westside Community Center where she helps to provide basic services to aid and educate citizens in the community. Dr. Thompson founded the Dream Team, a grassroots group dedicated to improving relationships between the community and law enforcement. She  was recognized with the South Carolina Municipal Association Achievement Award for Public Safety and the Riley Institute Diversity Award. In April 2021, she was honored by the South Carolina African American Heritage Commission with the award for preserving African American historic places.

Mayor Terence Roberts has served as mayor since 2006 and is the first African American mayor of Anderson. He is an Anderson native and business owner who has been in the forefront of the business and public service community for more than 30 years and has served on boards and commissions ranging from caring for displaced children to chairing the Chamber of Commerce Board. Mayor Roberts has served many organizations including the Salvation Army, serving as president of the Municipal Association of South Carolina, United Way Community Impact, Appalachian Council of Governments, Ten at the Top, Anderson University Board of Visitors, AnMed Health Board of Trustees, Rocky Rivers Conservancy Board of Directorsand Innovate Anderson.

Robert M. Rainey is a retired environmental engineer and nonprofit executive who has served the Anderson community and the State of South Carolina in many capacities over the past 40 years and is a member of the Anderson University Board of Regents and emeritus member of the Board of Visitors. After a career in environmental engineering, he was founding board member and later president of the Foothills Community Foundation based in Anderson. He serves as a trustee of AnMed Health and Brookgreen Gardens. He is chairman of The Stringer Foundation and the Callie and John Rainey Foundation and is a trustee of the Gambrill Foundation. He has also served as a member of the South Carolina State Museum Foundation, the Governor’s School for the Arts Foundation, the South Carolina Water Resources Commission and was chairman of the South Carolina Educational Television Commission.

Inclement weather may require the University to change the location and nature of the event. For details, visit the Anderson University Commencement page.