College of Education Graduate One of ‘10 Educators Making a Difference’ 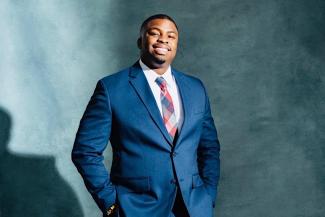 For Adrian Mayes, students come first. He admits being an educator is “hard work,” but is quick to add that it’s “heart work.”

Upstate Parent Magazine named Adrian Mayes, a 2015 graduate of the Anderson University College of Education, to its list of 10 Educators Making a Difference for 2022.

“I’m definitely humbled and honored to be a part of that,” Mayes said. “I know a lot of great educators and people who do this work daily, so to be chosen is definitely humbling and definitely an honor.”

Mayes, who is assistant principal and seventh-grade administrator at Hughes Academy in Greenville, South Carolina, speaks enthusiastically about his students and colleagues.

“I’m a strong believer in family. I’m a strong believer in working together. I work for some of the greatest educators that I’ve ever been around. I’m so grateful for each and every person—in the hallway where I work, even this entire school,” said Mayes, whose responsibilities have grown from a classroom of 25 students to 350 students and 25 teachers.

Education wasn’t always Mayes’ top career choice. Initially he considered entering engineering or a similar high-paying career. But he has no regrets about choosing education, looking back on several years of rich experiences guiding students.

“I really kind of dove into the youth of the community and trying to figure out ways to empower them and ways to make them feel noticed, to make them feel sane, and to show them they can be and do whatever they want to do to be a productive member of society,” he said. “I think one of the best ways to do that is through education.”

For Mayes, the student comes first.

Recalling a difficult student he encountered as a student-teacher at Varennes Elementary School in Anderson District 5, he said, “He and I went at it every day. I was not his fan. I was excited to teach him but knew it was going to be a struggle. When I got a call that I got a job offer to teach at La France Elementary School in Pendleton, South Carolina, I was so excited. I told my cooperating teacher at the time, Ms. Jenna Filyaw. She made an announcement to the class that I got a job… We were in the gym and he ran out and was so upset and crying. He said, ‘I don’t want you to leave.’ All this time I thought I wasn’t helping him and we were not seeing eye to eye. In reality I was one of the constants for him, and he was a constant for me. In that moment I knew I could really make a difference.”

Fast-forward to a more recent school year and Mayes remembers another challenging student having behavioral issues.

“I started speaking life into her and trying to get her on the right path. Maybe two or three weeks into that she didn’t want to stay. I kept begging her to stay and try to get herself together. She came by in the middle of the day one day and said ‘I’ve got to tell you something.’ I said, ‘So what's going on?’ She said ‘I brought all my grades up. I want to be the first person in my family to go to college. I want to make a change and I want to make a difference.’

I almost melted because my teaching is all the time about planting seeds,” he said.

From the time he first toured Anderson University, Mayes, who comes from nearby Seneca, South Carolina, felt right at home.

“It just kind of felt like where I needed to be. I met some really good people there, was able to build some relationships, was able to be mentored by a lot of people, so I’m really grateful for Anderson University and the things it taught me,” he said.

Mayes enrolled at Anderson University College of Education and was also in the initial cohort of Call Me MISTER (Mentors Instructing Students Toward Effective Role Models). Call Me MISTER was founded to increase the pool of available teachers from a broad, diverse background to teach at schools in underserved, socio-economically disadvantaged and educationally at-risk communities. He appreciates how the College of Education gets their students out into the schools to gain classroom experience early. He also appreciates caring faculty who helped him persevere through his program all the way to graduation.

“AU taught me to never quit. So I try to instill that to my students,” he said.

For Mayes and so many others, the past two years of COVID have added to the challenges of helping students succeed. But he remains optimistic.

Mayes plans to further his education with an eye towards becoming a school principal, working in school district administration or possibly even training future educators.

Mayes embraces a quote he heard once as words to live by:

Diversity and Inclusion College of Education