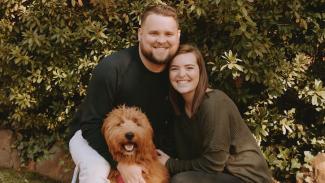 Daniel Massengale, a representative of the Fellowship of Christian Athletes (FCA) in Greenville County, is there for coaches and student-athletes. Daniel is pictured with his wife Abby and their dog Remi.

Billy Graham once said that coaches have more influence on a kid than most people do in a lifetime.

While most people associate FCA with ministry to students in high schools and middle schools, Massengale, a graduate of the Anderson University College of Christian Studies, focuses on coaches who daily pour out their lives into young men and women.

“We’re just as much a coach’s ministry as we are a student ministry,” he says. “We’re working with husbands and wives who are married and have kids, so everything we do is to and through our coaches.”

Massengale felt God was calling him into ministry work during his senior year of high school. As a high school student in Woodstock, Georgia, FCA was a big part of his spiritual growth.

“I was doing a lot with my youth group in church and just had a lot of guys in church around me who were mentors. I felt the Lord really calling me to step into ministry because I love people, I love relationships and I love building relationships,” he said. “We had a club that met every Friday morning. My youth pastor at church would have two interns every year. He would encourage them to get involved with a team at one of the high schools,” he said. “That was huge and challenging for me to be bold in the faith with my teammates at track or basketball practice.”

When he reached Anderson University, Massengale got involved with FCA as a student leader. He conducted Bible studies and, along with his roommate, started a monthly huddle for student-athletes. He sought to minister to those whose routines consisted of many hours of practices, games and travel. He helped establish chapel services and activities that fit student-athletes’ schedules.

“It wasn’t until after I got to Anderson that ministry became a real calling for me. I started out as a graphic design major. I ended up switching to Christian Studies my freshman year. I wanted to take classes that would equip me to do ministry well,” he said. “Just being around sports and getting to serve athletes really stirred up a passion in me to want to pursue ministry in the sports world.”

Mission-minded professors in the Anderson University College of Christian Studies left a lasting impression on Massengale.

“I took a lot of the youth ministry classes with Dr. (Tim) McKnight; he was so intentional with constantly preaching the gospel to us and emphasizing that we needed to be mission-minded no matter where we are,” he said.

After graduating from Anderson University in 2017, Massengale went to work at Scansource in Greenville, South Carolina. When he and his wife moved to the Greenville area, he began volunteering with FCA. In 2021 he joined FCA full time as area representative for Greenville County, serving six high schools and six middle schools in the northeast part of the county.

Now that he’s working full time with FCA, Massengale is blessed to be able to get to know coaches and student-athletes in the schools he serves.

“Most schools have an FCA Huddle that meets once a week or once a month, once every other week, so Wednesday mornings, Friday mornings, I’m usually at a school hanging out and getting to know students. Even after school, if I’ve connected with the team, I’ll go hang out at football practice,” he said. “I’m usually at a school either in the mornings or late afternoons when practices are happening.”

Massengale feels that most coaches have been very receptive and supportive of FCA’s ministry.

“We don’t connect with a team unless the coach gives us the green light or feels comfortable with letting us be there,” he said. “One of the first things we’re doing on campuses is connecting with coaches so we can love them well, serve them well and disciple them to lead well; that’s one of the biggest influences our kids are around.”

Social media and other entertainment platforms influence students who take notice of celebrities and others with their own version of the truth. Also, many student-athletes feel pressure to perform well; several have hopes of competing on the college level. There are also students struggling with family issues. In the midst of all that, when he sees students step up to disciple other students, he sees God working in young lives.

“To see students in front of their peers, their classmates and their teammates lead, pray, share scripture, share their heart and their testimony; getting to see that is probably one of my favorite things,” he said. 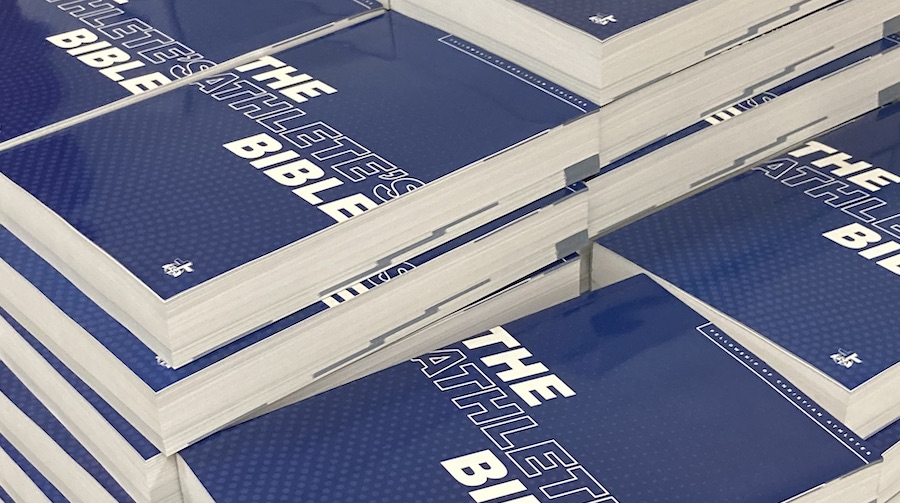