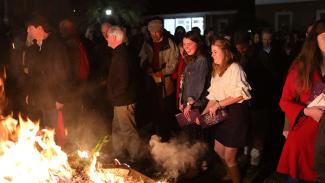 Anderson University is abuzz with anticipation of exams, Mrs. Whitaker’s famous Christmas cookies and winter break. Greenery is draped across campus and Christmas lights glisten in the December sky. Amid exam week and holiday festivities, the South Carolina School of the Arts is preparing for one of Anderson’s most popular traditions: Christmas First Night.

First Night takes place Friday, Dec. 6 at 7 p.m. in Henderson Auditorium, a one-night extravaganza celebrating Christmas with dance and song. Music and theatre students work together to create a festive evening that includes dancing, fun costumes and music from choirs, orchestras and bands.

“Christmas First Night at Anderson University has been celebrated in some form since the 1930s,” said Dr. Richard Williamson, a professor of music, director of choral activities and coordinator of music theory who is the director of this year’s performance. “In recent years, it has developed into a concert showcasing music ensembles of all types as well as a featured dance number. It is one of just a couple of times each year when the university choirs, wind symphony and string orchestra are combined. We have maintained a number of key elements of the First Night tradition: carol singing, a reflection on the coming birth of Christ, the singing of Handel's ‘Hallelujah’ chorus and the Yule log ceremony.”

“I think it is an extremely popular event because of the tradition that this event has,” said Kaitlyn Hamilton, a music education student performing at First Night this year. “Burning the Yule log has been a tradition for many years and it is one that everyone looks forward to. It also gives us the opportunity to take a moment to mentally and spiritually get ready for the Christmas season as a community.”

Faculty and students spend weeks preparing for the celebration and balance an intense week of rehearsals with their exam schedule. But everyone looks forward to becoming enmeshed in AU’s  First Night history.

“I am always really excited to be a part of First Night,” Hamilton said.“It has always been a favorite of my family. I can still remember sitting in the audience when I was younger and being in awe of the concert. I think it is really special that I now get to be a part of that and help others experience what I did through the gifts God has given me.”

First Night is true to Anderson’s commitment to Christian community. In the rush of the holiday season, First Night is a tradition founded on the real meaning of Christmas.

“Christmas First Night is extremely special to the Anderson community because of its focal point is Christ,” said Noah Greene, a senior also performing at First Night. “There are other events that are similar. Many bring the nostalgia of years past or the anticipation of another Christmas as First Night does, but First Night is set apart because every element of the event points to Christ. The choral ensembles, commercial music bands, orchestra and dancers all perform to point others to Jesus.”

The night will be one of rejoicing in the advent of Christmas, and the South Carolina School of the Arts welcomes the community, faculty and staff to join the celebration.

A limited number of tickets for Christmas First Night are available for purchase at the Henderson Auditorium box office, and a waiting list will be available at the door when tickets sell out.