When in Rome, AU Professors to Help Guide Conference on New Testament Epistle 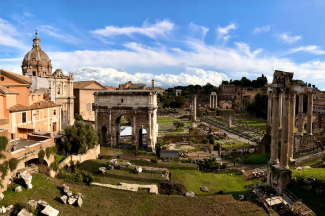 Two professors from the Anderson University College of Christian Studies will be part of a three-day conference devoted to the biblical book of Romans.

Two professors from the Anderson University College of Christian Studies will be part of a three-day conference devoted to one of the Apostle Paul's most well-known epistles—which is taking place in the very city to which he wrote.

In May 2022, Drs. Michael Duduit and Channing Crisler of the Anderson University College of Christian Studies and Clamp Divinity School will travel to Rome, where they'll join some of the most effective preachers and teachers in the English-speaking world to proclaim the truths of the book of Romans. Paul wrote the letter to Roman Christians around 57 A.D.

Dr. Duduit, who is dean of the college, and Dr. Crisler, associate professor of New Testament and Biblical Greek, are taking part in the three-day conference devoted to exploring the Pauline epistle.

Following three days of exploring the book of Romans, you have the option of extending your stay and touring ancient Rome and Greece. For those who would like to add optional tours in Rome and Greece, you’ll fly from Rome and enjoy five days in Athens, Philippi, Thessaloniki and other places where the apostle Paul preached and served churches.

Conference details, tour options and an itinerary can be found at www.preaching.org/rome.