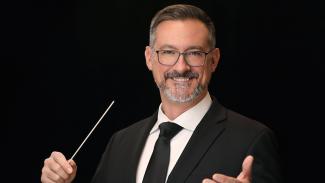 Dr. Christopher Hansen has been invited to conduct at the famed Carnegie Hall in New York City, and is inviting a select group of AU musicians to join the show.

In 2022, Dr. Christopher Hansen of the South Carolina School of the Arts at Anderson University will step onto a stage where for nearly 130 years many of the world’s greatest musicians have stood, beginning with Pyotr Tchaikovsky on opening night May 5, 1891.

Hansen will be guest conductor of the New England Symphonic Ensemble and world-class soloists, plus an invitational choir comprised of singers from across the nation, including a select group of Anderson University musicians for a performance of Ola Gjeilo’s “Dark Night of the Soul” and “Luminous Night of the Soul.” The performance will take place June 25, 2022 at New York City’s fabled Carnegie Hall, in the Stern Auditorium and on the Perelman Stage.

He received a call from prominent choral director Dr. Sonja Sepulveda, followed by an official invitation from Peter Tiboris, founder and general director of Midamerica Productions. Sepulveda had been following Hansen’s conducting, his social media posts and, admiring Hansen’s energy and enthusiasm, felt he was a good choice to be a guest conductor for Midamerica Productions’ 39th Carnegie Hall season.

“Never in my mind did I have this as one of those aspirations that could actually happen, so I said ‘yes, I accept the invitation,’” Hansen said.

The musical composition “Dark Night of the Soul” incorporates stanzas from the poem of the same name, written by 16th-century Spanish mystic and poet St. John of the Cross.

“I fell in love with this song when it first came out. I knew that I wanted to conduct this with an ensemble. It’s such an incredible piece of music,” Hansen said. Of this work, Hansen said it provides the “full landscape of what I call the emotive experience… You’ve got different textures working with each other-conflict, dissonance, tension and release.”

Another Gjeilo work to be performed, “Luminous Night of the Soul,” provides a contrast to his earlier composition, with its brighter, lighter feel.

Four separate regional rehearsals are being planned across the east coast, and Hansen hopes to include many singers from Anderson University and the South Carolina Upstate. Additionally, all three of Anderson University’s choirs plan to perform “Dark Night of the Soul” and “Luminous Night of the Soul” in Henderson Auditorium of the Rainey Fine Arts Center in March 2022.

For details and audition information, visit this link.