A Calling Across the Atlantic: Ministry and Journey to Citizenship 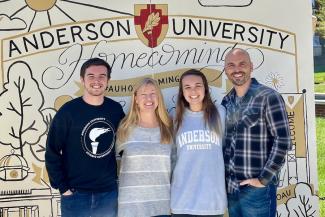 Nathan and Olivia Jones are pictured during AU Family Week with their parents, Martin and Fiona Jones. Pursuing God’s call into ministry led Martin to the U.S. More recently, all family members have become American citizens.

Nathan Jones and his sister Olivia Jones have been living in the United States for most of their lives. By all appearances they’re pretty much like any American college student. But only lately have they become American citizens.

Their dad, Martin Jones, was an attorney practicing law in Northern England. Feeling God’s call on his life to minister, he looked into seminaries in the United Kingdom and around Europe. He then learned about Dallas Theological Seminary in Dallas, Texas, and felt God was leading him in that direction; so in 2007, Martin, his wife Fiona, and their two children, Nathan and Olivia, made their move.

Nathan and Olivia’s family came from Inskip, a small village of 200 inhabitants located near Manchester in northern England. Inskip consists of little more than a couple of churches, a school, a pub and some houses along a rural road.

Nathan recalls a Skype call they made with their old school shortly after they moved to Texas. Looking back, he’s amused at the questions from his English schoolmates:

“Are you going to wear a cowboy hat?”

“Are you going to get a horse?”

“Have you had a tornado yet?"

“When we first moved to the United States, our dad had a student visa, and so you don’t just move to a country and become a citizen. He had a student visa for several years,” Olivia said. “Mom and dad weren’t super eligible to work, so that was just an immediate need.”

Nathan and Olivia’s family moved at a time when the British pound was strong against the American dollar, which worked in the Jones’ family’s favor initially, according to Nathan. Their dad was able to earn honoraria for speaking at various churches, but finances became tight. There was a time Olivia recalled that the family needed $500 for some bills. On the day the bills were due, someone had left at their doorstep $500 cash in a blank envelope.

“We saw how to truly depend on God and what trust in God looks like from our parents, which is absolutely incredible,” Olivia said, adding that her dad eventually had a work visa when they moved to Chicago to follow God’s call to a church there.

“We thought we would be returning to England after our dad studied and he kept us here; and me and Nathan, we really have grown to love America the same as our parents, and our plan is to stay here,” Olivia said.

Martin is currently an adjunct professor at Anderson University as well as a professor at North Greenville. Fiona teaches middle school English and Bible at Asheville Christian Academy, where Nathan and Olivia graduated.

“We came and toured, and a few months after the tour I was able to stay overnight and just felt very welcomed at All Access Weekends by the faculty and students,” Nathan said. That visit confirmed in his heart that he belonged at Anderson University. When Olivia visited Nathan at Anderson, she felt at home there, so during her sophomore year of high school her heart was set on Anderson.

Nathan is a senior Accounting and Financial Economics major, and Olivia is double majoring in Media Communication and Christian Studies. Both have been active in campus life—Nathan as current Student Government Association President, and both have been involved in Base Camp and various ministry organizations.

When Nathan wanted to apply for an internship in Washington, D.C., he learned that to be eligible, he had to be an American citizen. The process of gaining citizenship is a lengthy one, according to Olivia.

“We had to wait 13-14 years to begin the application and then be eligible to take the test. You’ve got to go to appointments that are two hours away just to get your fingerprints scanned, and then you have to wait another three months for them to approve you to take the test,” said Olivia. Nathan commented, “We knew 95 percent of the answers to the questions, and for our parents it was slightly different because they had finished school when they came to the states, so they had to really study. They have not had 12 years of American school. Their history with what we had told them and watching Hamilton—that was about 80 percent of what they knew.”

“I applied for those D.C. internships and COVID-19 happened. I had an appointment the week after all the schools shut down. Of course that was all of the nonessential part of the government and they weren’t doing appointments, so I had to wait months and months before they were able to open up again,” Nathan said. “Then in July 2020 I was able to take the citizenship exam. I pictured this grand celebration with everybody there, waving American flags like you see in movies. It was just me, a lady from the Middle East and another lady from India—just three of us with our little flags saying the Pledge of Allegiance together.”

Olivia recalled “I think that was something really difficult because the four of us had always pictured this grand thing of citizenship being done together, so it was hard enough that we were doing it across this time span of about a year and a half, all of us taking this test, but the hardest part was not being able to celebrate together.”

Nathan’s citizenship became official while he and Olivia were involved in Base Camp, Anderson University’s orientation. Students and others at Anderson threw a huge celebration. Olivia’s citizenship came just before final exams in the Spring 2021 semester.

One of the sacrifices of living in the United States has been living an ocean apart from family members.

“Our grandparents were literally a stone’s throw across the road, lived directly opposite from us, then my mom’s mom lives maybe 10 houses down the road,” Olivia said.

Since coming to live in the United States, some of Nathan and Olivia’s relatives have come for visits, and the family has also returned to Inskip; mostly for mission trips with their dad taking groups to conduct a Vacation Bible School.

“It worked very well for a week, but then you kind of see the drop off,” Olivia said, adding that many people they approached were cold to the gospel. “There’s just a lot of what I would call ‘lost Christianity’ where a lot of people go to church but nobody really takes it outside of a Sunday morning,” she said.

Nathan and Olivia hope to return to England someday after graduating from Anderson University.

“Unless God pulls us somewhere else, this has really become home for us. Obviously England is still home because of family, but we would really consider that America is our true home because we’ve lived here for so much of our lives,” Olivia said.