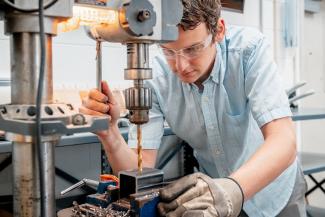 Zac Benson, pictured working on a sculpture, is an international artist who expresses his Christian faith through his art.

Zac Benson, assistant professor of art in the South Carolina School of the Arts at Anderson University, is an international artist who expresses his Christian faith through his art.

Benson’s works have been shown in Taiwan, Bulgaria and throughout the United States. He has had public commissions in Australia, California, New York and Washington, D.C.

During summer 2021 Benson has been researching and developing a new art installation funded by an FDC Summer Professional Development Grant he received.

His gallery work portrays Benson’s personal faith and beliefs and his engagement with society while his public sculptures deal with the traditional relationship of scale and form. Emboldened by his experiences of studying at primarily secular institutions, Benson wants his art to start discussions on a spiritual level among Christians and non-Christians alike.

“I don’t make explicitly Christian art work. I tend to think if you’re really blatant and explicit, you’re probably going to only attract Christian viewers. I think the Lord has called me to talk about Him amongst all peoples so His name will become known,” Benson said. “That’s what I think the Lord does best—He has a conversation with us, he wants us to open the door. I try to do this in my artwork.”

Benson says of the installation he’s currently working on, “Years ago I thought of an idea. If we could step into the presence of God what would that feel like? And how could I get the viewer to feel that? A lot of times when you present your work in a gallery or museum, you’re going to have both believers and non believers come in. How do I engage both of them and how do I showcase my faith or the Gospel of Christ through my artwork?”

Imagine viewers stepping into a room surrounded by fans generating a wind from all directions. Benson has to work out the details, but the idea is for an immersive experience engaging the senses of feeling and hearing the wind.