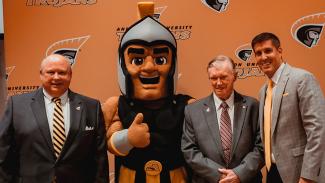 Anderson University intends to add football as its next intercollegiate athletic program, having secured a $3 million challenge gift to raise an additional $3 million needed to field a team, University officials announced today.

“After years of discussion, careful consideration and operating from a position of academic and financial strength, Anderson University’s Board of Trust is adding a Trojan football program as its next successful athletic team,” said Anderson University President Evans P. Whitaker, Ph.D. “In the past several years, Anderson has experienced exponential growth in enrollment, added innovative academic programs and enjoyed the best national and regional rankings in the history of the University, among them being recognized as 27th in the nation for student engagement by the Wall Street Journal, and being named an Apple Distinguished School for the last six years. With this firm foundation, and the magnificent gift we’ve secured, the time is right to offer Trojan football to our community.”

Upstate South Carolina philanthropist and friend of Anderson University, Dr. Melvin Younts, is providing $3 million as a challenge gift in support of the initiative. University officials are seeking partners to realize Dr. Younts’ gift and bring in a total of $6 million to launch the program. The goal is to field a team for the 2024 season that will play NCAA Division II competition as a member of the South Atlantic Conference (SAC).

“The Trojan football program is being built on the same foundation that has made Anderson into one of the best Christian universities in the country,” said Vice President for Athletics Dr. Bert Epting. “Our administration will recruit student-athletes and coaches who are excellent ambassadors of our university who excel on and off the field. The future of Anderson University in general—and our athletic program specifically—is very bright.”

“Launching football from a position of strength means two things: that football will maintain Anderson’s student selectivity and high academic standards, along with its equally high standards for student-athletes’ personal and professional development, and that paying for football will not take resources from existing academic, athletic or student-life programs. We are most grateful to Dr. Younts for his vision and his generosity which are the catalysts for this expansion,” President Whitaker said.

“Football is expected to be an addition that all students and the surrounding community will enjoy,” said Anderson University Vice President for Student Development Dr. Jim Fereira. “Already recognized for its exceedingly high level of student engagement, we are certain that football will make AU an even more engaging campus for students and fans.”

“Anderson expects to initiate football in the fall of 2024, or possibly sooner contingent upon the completion of meeting the terms of the challenge gift and the construction of campus football facilities. We are absolutely thrilled to compete in the South Atlantic Conference, which is known to be one of the best NCAA Division II football leagues in the nation,” President Whitaker said.