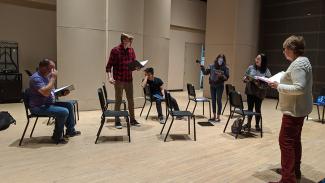 “Of Angels and Dragons,” written by Professor Robert Homer-Drummond and directed by Diane Lee, premieres Friday, January 17 beginning at 7:30 p.m.

An Anderson University professor has written a new play inspired by his experiences as the son of missionaries in Vietnam. Although the play is fiction, it is grounded in his emotional reality and the timeline of events in Vietnam.

“Of Angels and Dragons,” written by Professor Robert Homer-Drummond and directed by Diane Lee, premieres Friday, January 17 beginning at 7:30 p.m. Two performances are scheduled for Saturday, January 18, at both 2 p.m. and 7:30 p.m., and a final matinee is on Sunday, January 19 at 3 p.m. All shows are at Belk Theatre, inside the South Carolina School of the Arts at Anderson University’s Rainey Fine Arts Center.

“Of Angels and Dragons” follows Sean, a middle-aged professor. Haunted by the death of his missionary grandfather, he returns to the country of his birth, Vietnam. Throughout his journey, Sean discovers the impact that the Vietnam War had on both sides, citizens and soldiers alike.

Based on the Professor Homer-Drummond’s own life and the lives of other missionaries and Vietnam veterans, “Of Angels and Dragons” delves into deeper topics such as PTSD, the horrors of war and the healing power of forgiveness. Professor Homer-Drummond was born in Vietnam, and his grandfather was killed during the Tet offensive in 1968, a turning point in the conflict. His parents were missionaries there for 10 years before serving in other countries such as Cambodia and Indonesia before their retirement. Driven to tell this story, professor Homer-Drummond took a trip with Anderson University students to Vietnam for inspiration to complete “Of Angels and Dragons.” Dr. Jo-Carol Mitchell Rogers, AU art professor, also accompanied the students to Vietnam and served as the production’s set designer.

The story features two Vietnamese actors, who will be speaking Vietnamese with English translations available, along with other professional actors and Anderson University students. This play provides an authentic portrayal of the culture that it embraces.

“The play delves into the difficulties of war and how affects individual people,” said Lee, “not just those who are directly involved with the war, but also their families, their friends…both countries with how they look at the situation and that it spreads throughout families, personalities, and situations.”