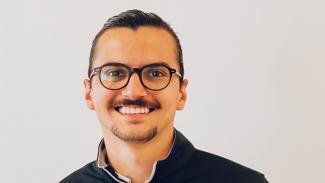 Jared Palomo had his sights set on medical school, then found himself at an intersection, encountering a career option with which few are familiar. Since making his decision, he hasn’t looked back.

Palomo, a biology graduate from the Anderson University College of Arts and Sciences, is devoted to making a difference in the lives of individuals experiencing chronic pain. His work is a unique partnership with doctors and patients where technology and medicine come together to provide relief.

Growing up in San Juan, Puerto Rico, Palomo sought an athletic scholarship at a major university until fracturing a vertebra from a soccer accident changed his plans. He wanted to go to college in South Carolina and Anderson University was one of the institutions he toured.

Palomo enrolled at Anderson University, majoring in biology and minoring in chemistry. As a student he was also actively involved with the Anderson Science Association, becoming a president, and was also an ambassador for the Office of Admission. Upon graduating from Anderson in 2016, Palomo joined Prisma Health’s Medical Experience Academy (MedEx), a program for college students pursuing careers in health care. He graduated in 2016.

“I actually took a gap year after I graduated to do MedEx to prepare to enter medical school or try to be a Physician assistant,” Palomo said. “In that gap year, I took a position at a practice in town that quickly molded me into a clinical coordinator for the practice. I was there about a year when Abbott Laboratories, the global healthcare leader, came into the practice. I was introduced to my current manager and I gave him my plans. I said to him this is just a gap year and I’m trying to get into medical school.”

The manager told Palomo about a unique job opportunity through Abbott and encouraged him to consider it. Palomo spoke about the opportunity with one of the physicians at his practice who gave him a piece of advice.

“He told me this position that Abbott is offering is not a position many people know exists or that comes often. He said, ‘You could try it for a couple of years and if you don’t enjoy it, medical school is always going to be there,” Palomo said, adding that he took this advice to heart and concluded there was no reason he shouldn’t try it.

“It was a happy detour,” Palomo said. “I wasn’t really aiming for that role; it came up. Wow, here I am.”

Palomo advanced quickly as a clinical specialist working for Abbott’s neuromodulation business specializing in chronic pain treatment. For his efforts in helping patients enjoy a better quality of life, Abbott named Palomo Clinical Specialist of the Year for the South in 2019.

One of the most important aspects of these high-tech medical devices is that they are a drug-free remedy.

“For many areas with an opioid epidemic and abuse of medications, this has been a very beneficial, huge part of transitioning patients who either don’t react well to medications or are no longer surgical candidates, yet still have an option to get some pain relief,” Palomo said of the device known as a spinal cord stimulator.

Spinal cord stimulators are electronic devices a patient can control wirelessly using a Patient Controller device or through their Abbott app on their iPhone. Palomo points out that, unlike other types of implanted devices such as pacemakers, patients can initially try the therapy using a temporary external device connected to leads that travel into the area of nerves involved in the patients’ pain. If the trial is successful, then a more permanent device can be implanted.

Among Palomo’s favorite stories is that of a man who was still experiencing severe foot pain 10 years after an injury he sustained in an auto accident.

“He went through his trial. Right after the trial we sat down with him and programmed the system. Immediately, the moment we turned on that stimulator, the patient's eyes just opened wide and tears started flowing. He asked ‘can I try to stand?’ We got next to him to help him. He stood up and put pressure on that right foot for the first time in about 10 years,” Palomo said. While not all patients can be helped by the devices, this is a success story that humbles Palomo.

Palomo appreciates the sense of community he experienced at Anderson University and learning the importance of valuing others—lessons that continue to guide him as he works with his patients and their doctors.

“Any time we’re in an office or in a hospital setting, every person from the moment you walk in—from the front staff to the nursing staff to the doctors to the administration hospitals–all of those persons play a part. Anderson really instilled in me that every person has a purpose and role to play that are equally important. That sense of community—regardless of what your role is—really stuck with me,” he said.