Interior Design Alumna Credits AU for Preparing Her for Success 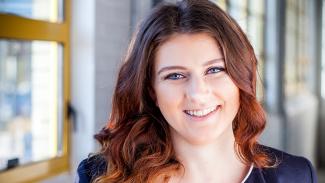 Rose Bachman's springboard to an career with noted interior design firm McMillan Pazdan Smith was the comprehensive, entrepreneurial experience she gained at the Anderson University School of Interior Design.

Most people give little thought to rearranging their bedroom; they’re just trying to live better in a limited space.

This simple activity helped Rose Bachman, a graduate of the Anderson University School of Interior Design, to fine-tune her calling.

“I felt like kind of an anomaly because other students around me seemed to know exactly what they wanted to do,” said Bachman, who knew she wanted to go to college but was still unsure of potential career directions. “I took a lot of personality tests and they didn’t really lead me towards anything I was interested in, but I started to notice how much I loved moving things around in my room or giving design opinions.”

The idea of creatively crafting interior spaces resonated with Bachman. While considering it as a profession, she toured some colleges with interior design programs.

“Visiting Anderson University is what sealed the deal for me. After meeting (School of Interior Design Dean) Anne Martin and talking to her, I had a better grasp of the program and what it involved. After experiencing the first semester, I knew that was the direction I wanted to go,” she said.

Since graduating from Anderson University with honors in 2016, Bachman is headed into her fifth year as an interior designer. As a certified interior designer with McMillan Pazdan Smith in Charlotte, N.C., she’s admittedly detail-oriented and committed to collaboration. Looking back, she feels her education at Anderson University has equipped her to handle all of the moving parts involved in helping her clients move from initial design to completion of a project to their satisfaction.

At the School of Interior Design, Bachman moved beyond conceptual design and dug deeper into industry-standard software. Early on she learned computer assisted design (CAD) and related software that she relies on daily. While a student, Bachman interned at DLR Group, an interior design firm in Santa Monica, Calif. She also received Honorable Mention in the 2016 American Society of Interior Designers (ASID) Otto Zenke Student design competition.

“For me, the faith-based portion was really important to keep me balanced,” Bachman said. “I felt like I really benefited from the cultural experience events; that helped because as a designer you have to know a lot about different people’s backgrounds and different cultures.” Bachman also is mentoring a current interior design student at Anderson University.

Bachman’s career has encompassed “a little bit of everything” and has included some projects exceeding $40 million.

One of Bachman’s more challenging, yet rewarding projects was to transform a public library in Georgia into more of a hub for community life.

“Libraries don’t get to update their spaces often, so to come in and provide solutions for them that we knew would last a long time and that they could easily maintain was so important because they reach out to a wide demographic in the community, from young to old,” Bachman said. “Libraries have so many different types of spaces and so many programs. We’ve been doing a lot of makerspaces where kids or adults can build projects and do hands-on crafts type things.

“I think even (despite) COVID you’d think they would be shut down, but they use their big open rooms as a place where people can come together and still be physically distanced.”

Bachman said that the library became an even bigger asset to the whole city.