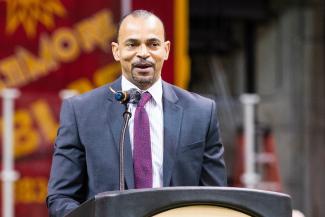 Borrowing a term from soccer, Former Trojans soccer player David Bascome contends that when life hands us a “red card,” the game isn't over.

In soccer, getting a red card isn’t a good thing. It’s associated with a foul or misconduct, so when a player gets one, it’s “Game Over.”

When life hands us red cards, David Bascome contends that the game is not over. It’s not about what happens to us, but how we respond. Bascome, along with friend and former roommate Tommy Harrell, came together to publish the book Red Card: The Life Book of David Bascome. The book, recounting Bascome's life experiences, is devoted to pushing through adversity and seeking success.

Bascome, who attended Anderson University in the late 1980s, coaches the Baltimore Blast, a professional indoor soccer team. When Bascome was young, he was a soccer star in his native Bermuda. Playing on Bermuda’s national youth team, Bascome was already a seasoned soccer player when he came to Anderson and put on the Trojan uniform. He then built a career as a professional, playing for franchises that included the Harrisburg Heat, Denver Thunder and Baltimore Blast. Bascome became an assistant coach of the Baltimore Blast in 2006, then in 2020 he became their head coach. He’s also a Brand Ambassador for New Balance.

A strong advocate and mentor for young people, Bascome extends his leadership principles beyond the field to The Bascome Futbol Leadership Academy. The academy, offered across the nation and in Bermuda, seeks to create a relevant, coherent and engaging environment for young players, their parents and coaches.

Bascome’s youth
By all appearances, Bermuda is paradise, but it was there that Bascome experienced torment as an orphan, growing up in an atmosphere of sexual abuse. Enduring the pain of the past, he found success, but it wasn’t easy. A recruiting call in the late 1980s from Tom McCormick, Anderson’s then-head men’s soccer coach, represented an opportunity for Bascome to break free and seek a new life.

Boarding a Delta flight to Atlanta, then a Greyhound bus to Anderson started a significant journey for Bascome.

“When I arrived I left behind a lost young man. I left behind a whole slew of destruction and broken pavement in the road. Anderson saved my life,” Bascome said. “I was put in a situation to be so empowered and so strong and it started the journey, to start pushing back on these walls. The abuse that I went through, if I didn’t have this escape, this exodus, this movement to Anderson, there’s no telling where my life would’ve been. I came up through an orphanage. I was lost and it provided some stability. The education was very hard, but I was okay with that.”

Bascome looks back on his years at Anderson as life-transforming. He admits to being shy when he first came. On the soccer field, Bascome was in his zone, but Harrell helped him adjust to the campus and culture. The two formed a strong, lasting friendship that endures today.

Bascome said, “It seemed we just connected. We’ve been just brothers since that time.”

“When soccer was over in November, that was a time when my service to David, to be a loyal, good friend to him, was pretty much to get him accustomed to the idea that now it’s crunch time, that school and spirituality actually matters,” Harrell said.

After graduating from Anderson, Harrell went to New York City and became a published author, actor, model and songwriter. Most recently he’s been involved in education and runs the South Jersey Educational Think Tank.

Harrell felt Bascome had a compelling story that should be shared to a larger audience. The two recently came together to produce the book, Red Card: The Life Book of David Bascome and a documentary that tells Bascome’s life story while offering inspiring lessons in personal empowerment.

Red Card: The Life Book of David Bascome will be released in March 2022. Details can be found at Bascome’s website.

Documentary
Red Card: The Lifebook of David Bascome is also being shot as a docu-series that will be released in March 2022 accompanied by the Red Card Book. Details are in the works for a March premiere “Red Card” event in Bascome’s native Bermuda that will include the docu-series itself, a press event, reception and book signing.

Bascome envisions his biography as not only his life story but also a toolkit for personal development. Filmmaker Gil Rios was intrigued by Bascome’s story and jumped at the chance to film the project. As an award-winning filmmaker, director, video editor and winner of the Best Web Series, Rios prides himself in selectively choosing creative partnerships where he is able to bring to life stories and experiences through his video making.

The docu-series is being shot in Baltimore, Bermuda and New York with footage from Anderson University as a featured location in Chapter 3-Exodus. Bascome and Harrell partnered with Rios after viewing the work Rios completed for the Stockton University Scientific Debates for Harrell’s South Jersey Educational Think-Tank and his work serving as a guest teaching artist at Lincoln Center.