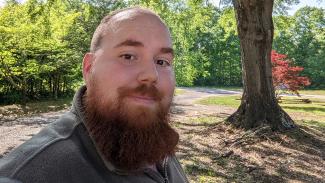 As a kid, Clayton Tinsley had two passions: Boy Scouts and tinkering with hand-me-down computers. Little did he know that each would impart life skills that benefit him to this day—along with professors at the Anderson University College of Business, who helped him refine those skills.

“My favorite position I held was (a Boy Scouts) troop guide. I would go around and teach people how to do things. I just wanted to make things available for people,” said Tinsley of his days at  Troop 96 in Powdersville, South Carolina. Tinsley was also drawn to computers, observing his dad as he ran drafting software on his computer for his job as a land surveyor.

“At a point, Windows 98 computers were cheap and mom bought me one at a yard sale. I managed to uninstall Windows. I also figured out how to reinstall Windows based off of some disc laying around,” Tinsley said. “That started my fascination with computers and my proficiency with them. Ever since then I’ve always been the tech guy.”

TTI is an international manufacturer of brands including Ryobi, Ridgid, Baja, Milwaukee, Homelite and Hoover. Tinsley works with data, analyzes the company’s supply chain and advises his colleagues on operations domestically and at factories in China, Vietnam and other countries.

“We move a lot of inventory every day. It’s amazing. You’re sitting here and you’re watching these dollar numbers,” Tinsley said. “When I first came into my career, day one I was stuck on solving small line item issues. It was a big deal to me at the time because it was $60,000, which seemed like a huge amount. Now they don’t even get me out of bed if it’s less than a million. When there’s a problem that comes down from the top and someone needs answers as soon as possible, they are coming to me.”

Tinsley has been involved in large decisions such as what to do about shipments delayed when a large container ship blocked the Suez Canal in April 2021. He also troubleshoots the day-to-day reconciliation of thousands of orders to their respective shipping containers daily.

That’s where Tinsley had one of his most rewarding experiences.

He wrote a computer script that automated that process, removing time-consuming manual work and enabling data to be verified and updated on a large scale, saving man-hours and money.

“We had two people working full time to keep this stuff up-to-date. It took them all week and they were always behind. There was so much information. Now this one script does what they did in a year every day. It was a huge problem to solve. It would have basically become the equivalent of us getting the same performance if we were to hire a team of a hundred people,” Tinsley said. “You’re getting to sit down and you’re solving supply chain issues. You’re taking daunting tasks and breaking them down into easy to handle, easy to use infrastructure. That is probably one of the big things I’ve done in the last couple of years.”

Tinsley enrolled at Anderson University to study Computer Information Systems. Among his required classes were supply chain courses taught by Dr. Kimberly Whitehead at the College of Business. Supply Chain concepts really clicked for Tinsley and he took more classes, adding it as a major.

“I feel that what makes the AU education shine is the faculty. Small class size, faculty interaction throughout my time drove home interpersonal relationships and skill sets to succeed in my career,” Tinsley said. “Anderson University has a high focus of faculty wanting to get to know their students.”

Tinsley, who majored in Supply Chain Management and Computer Information Systems, graduated from Anderson University in 2016, then went on to complete his MBA from Anderson a few years later.

His advice to anybody wanting to work in his field is to be committed to working hard, be flexible and to develop effective communication skills.

“Learn to email, learn to reach out, learn how to make those introductions, learn to communicate. You’ll be amazed how far in the real world you can get with that. Don’t be afraid to ask for advice and learn how to communicate with people,” he said. “You have to have a good amount of industry knowledge, a good amount of academic knowledge and a good amount of technical knowledge. It’s combining all of these fields, then you have to know how to work with people. If you can dot all your ‘i’s’ and cross all your ‘t’s’ you can make something marvelous happen.”