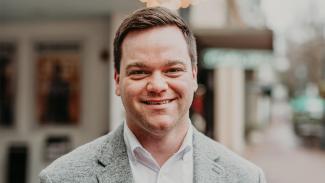 Anderson University graduate Chase Heatherly is providing strategic leadership for Evening Post Industries, one of the print media’s most revered brands in the Southeast. During a time when most print media outlets have struggled to grow in a digital age, Evening Post Industries has been in expansion mode, establishing a presence on multiple online platforms and expanding into new markets.

Heatherly, who graduated from the Anderson University College of Business in 2013, was recently promoted to regional chief revenue officer for Evening Post’s Community Newspaper Group, which includes news media operations in South Carolina communities that include Columbia, where he resides, as well as Summerville, Mount Pleasant, Georgetown, Myrtle Beach and Kingstree. He joined Evening Post Industries in 2017 as a publisher and advertising director.

“We recognize that our industry’s future lies in the digital space and are heavily investing in our digital transformation, providing our quality journalism through our website, apps, e-newsletters and reader events. However, we remain committed to our legacy print media products who continue to serve our core audience,” Heatherly said.

Originally from Anderson County, Heatherly initially had his sights set on leaving his hometown, but when he visited Anderson University, he felt it was an institution on the rise and wanted to be a part of that growth. His experiences at Anderson University helped him grow in his Christian faith and the robust academics challenged him and helped him to grow professionally.

“I left with well-rounded knowledge of business along with the professionalism and soft skills needed to be successful in the workplace. As a marketing major, I also learned finance, accounting and Microsoft Excel skills that I now use as the chief executive of five business units,” Heatherly said.

As a student, Heatherly became involved in Enactus, an international non-profit organization that partners with leaders in business and higher education to mobilize university students to make a difference in their communities while learning to become socially responsible business leaders. He served Enactus as a project manager, then was elected president of the AU Enactus Team.

“(Enactus) was an incredible leadership experience and allowed me to build relationships with business leaders in the Anderson area. The project I managed was a partnership with a foster care ministry in La Esperanza, Honduras, which included me leading teams to Honduras three years while at AU,” Heatherly said. He also served in the university’s Student Government Association (SGA), was president of Delta Mu Delta, a business honor society and created a team of more than 30 students in AU’s Relay for Life in 2011. For Heatherly, Relay for Life will go down as one of the most fun nights of his college career, ending with a spontaneous food fight within their team.

A highlight for Heatherly came during his senior year, when he became the youngest recipient of the Anderson Independent-Mail’s 20 Under 40 Award, recognizing his leadership skills and naming him among 20 emerging leaders in Anderson County. This award was a factor influencing him to enter the news media industry.

“I have always recognized the value that local media brings to a community, but I had not considered the industry as a career path,” Heatherly said. “As I advance through my professional career, the Lord continues to teach me to trust in Him and not in my own ill-perceived ability to maintain control,” Heatherly said. “I always think back to Jeremiah 29:11 and I’m fortunate to have seen this promise from the Lord fulfill in my life.”

“AU taught me the importance of giving back to my community and supporting those around me,” Heatherly said.