Nursing School Student Rises to the Occasion During Pandemic 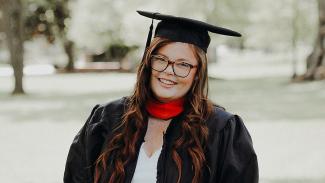 During her senior year of Nursing School, Bailey Nafziger handled an influx of COVID patients with poise and God-given purpose.

Working in an urgent care facility, swamped with an influx of sick patients, can weed out anyone not cut out for nursing.

But one Anderson University nursing student rose to the occasion in spite of the COVID-19 pandemic.

During her last semester, Bailey Nafziger was shadowing nurses at CareConnect, a preceptor site for the Anderson University School of Nursing in the College of Health Professions.

“It had been kind of slow,” Nafziger said. “Then (one) night before we were about to close up, it was like the floodgates opened and we had 60 to 70 people come in.”

Leslie Brown, who was working with her that evening, saw Nafziger in action and was impressed by how she faced a challenging day head on.

“Bailey didn’t miss a beat,” said Brown, a CMA with Anmed. “She was kind and jumped every time I needed assistance. She also displayed kindness and professionalism in a chaotic situation. I have been working at this office for almost four years and have seen several seasoned nurses struggle with such a busy practice.”

Nafziger said she learned a lot that night and has nothing but praise for the medical staff there.

“The staff at CareConnect, all the nurses, the doctors, they make it so easy to follow their lead, how they treat patients,” she said.

Nafziger, who graduated this month with a B.S. in Nursing, feels God led her into nursing and also into Anderson University. She saw several factors come into place as she was considering careers. While caring for her great-grandmother toward the end of her life, she was still praying about whether or not to pursue nursing.

“My great grandmother got sick and I was able to take care of her instead of nurses and interact with her. I was sitting there helping my ‘me me’ in the nursing home. I was feeding her lunch and it was like a light bulb moment. She looked at me and said ‘Why don’t you do nursing?’”

Her words were a confirmation for Nafziger.

Growing up in Anderson, Nafziger knew about Anderson University. She knew she wanted to go to college but was hesitant.

“I’m the first in my family to go to college, so we didn’t know the whole process,” she said. But Nafziger toured the campus with her uncle; it was eye-opening.

“I actually met President Whitaker and his wife in the admission building and she was talking to me and walking through how they felt God everywhere they went, in the classrooms, just walking across campus,” she said. “One girl told me that the professor was just praying for them all of the time or she would go to their office and they would pray over her. It kind of felt foreign to me but I was like ‘that’s awesome that somebody is going to pray over you.’ It was like God saying ‘This is where I want you. I provided for you. I opened the door.’”