AU Graduate Among ‘20 Under 40’ Awardees 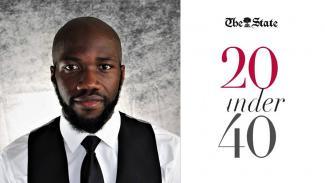 College of Arts and Sciences alumnus Brad Washington was named by The State newspaper as one of South Carolina's "20 Under 40" honorees.

In its recognition of outstanding young adults in South Carolina’s Midlands, The State newspaper included an Anderson University graduate in this year’s “20 Under 40” feature.

Brad Washington, a 2018 Human Services and Behavioral Science graduate, was recognized as one of 20 individuals under 40 dedicated to excellence in serving others and was honored for creating The Greenprint, a social-emotional learning and culture-building program for students.

Washington, who has served as site coordinator for Communities in Schools and campus director for Boys & Girls Club of the Midlands, feels that being mentored by Ken Garner, Boys & Girls Club area director, made a difference in his life and career trajectory.

“He showed me how to work with kids, work with a group of kids and develop a relationship not only with them but with their parents,” Washington said. When he became a teacher assistant and behavior interventionist at Windsor Elementary School in Columbia, he received confirmation that education was his field.

A pivotal moment at Windsor Elementary further reinforced that career calling for Washington. When he finished his online program at Anderson University, he began looking at other opportunities.

“When I talked to the new principal, Denise Quickel at the time, she calmed my nerves.” Washington recalls. “She told me to stay put because she had a good idea for me.”

When Washington returned for the next school year, he was given more flexibility to build relationships with his students and try out some of his ideas.

“I thought I had to come in and just be like a disciplinarian, or be the campus director who does more of the clerical things; then I realized that I didn’t have to do that with them. They were a good group of kids, they weren’t a bad group of kids at all,” Washington said. With that, he began researching ways to build on the positives he saw in his students, and the result was The Greenprint.

The Greenprint is similar to an architectural blueprint, but instead of building a physical structure, it sets out to build a culture for students addressing different areas each school day.

One day would be devoted to discussing what happened the week before and what’s coming up; also good things the class is doing and things that need work. On another day, positive behaviors, including neatness or paying a compliment to another student would be rewarded. Vital to culture-building, according to Washington, is complete class participation and grasping skills in teambuilding and communication, as well as social skills. Important also is being in touch with another’s feelings and responding with empathy.

“I was teaching some of the teachers at my school some of the elements of the social/emotional learning components that I was doing in the afternoon,” Washington said. “That’s where I started saying ‘I’ve got to write a book on this.’”

He recently completed his book, The Greenprint, which shares his ideas about the concepts he’s put into practice with his students.

After studying early childhood education at another institution, Washington was seeking out a behavioral science program and chose Anderson University’s online program. He is grateful to his academic success advisor, Paula Williams, for helping him to manage his online coursework while working two jobs. Williams is proud of Washington’s accomplishments.

“He is truly one of my success stories that keeps encouraging me that I am right where God would have me to be,” Williams said.

“If it wasn’t for Paula Williams, I wouldn’t have been on the right track,” Washington said. “Being online—it was not hard but it wasn’t easy, but I definitely had the support from the teachers and Ms. Williams. If I needed to talk to them or email them or whatever it was, I always had that access to do that. It was also great to be on Canvas to talk with the other students too. Each semester, it was like a family.”

Washington firmly believes that school should be a place where youngsters want to be.

This fall, Washington heads to Newberry Elementary School, where he’ll continue to put his principles from The Greenprint into practice.

More details about The Greenprint can be found on his website.