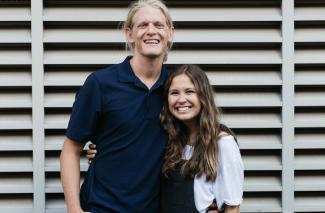 A graduate of the Anderson University College of Education will return to Zambia where she and her husband will continue Hands of Hope’s mission.

A graduate of the Anderson University College of Education is making plans to return to Zambia, where as a young college student, God led her to make a difference in the lives of impoverished children.

Through the efforts of Savannah Leighton Black came Hands of Hope, a group of Christians who feel called to help the community in and around Lusaka, Zambia, to share the gospel and improve lives through education, clean water and nutrition. Hands of Hope has grown in its outreach to Zambia, as well as in the ways it ministers to people.

At Anderson University, as Savannah prepared for a teaching career, her professors encouraged her to see her classroom as a mission field. During this time God was impressing Zambia on her heart. Hearing a chapel speaker’s message about going forth into the world with the gospel confirmed where she needed to be.

Savannah recalls, “I messaged a man in Zambia named pastor Bitwell Njovu. He says to this day that he did not believe me when I said I bought a plane ticket. He did not believe I was actually going to come until he saw me get off the plane. He was shocked. So anyway, long story short, I started working in schools there volunteering teaching English one to two weeks at a time and I stayed there for about two and a half months working in something called community schools.”

In Zambia, community schools are for children from families unable to afford a private school. Though public schools don’t require fees, they require families to buy uniforms for their students.

“When I was in those schools... It just made me sad because I saw a lot of potential in these kids, but a lot of conditions that were not conducive for them to feel loved and cherished and for them to truly learn the way we learn in the United States, which is such a blessing,” Savannah said.

Savannah helped Njovu start an official nonprofit, Hands of Hope, in both Zambia and the U.S. to fund the school and also the work his church does to help local children in need. In addition to the school, the nonprofit operates a feeding program and a child sponsorship program.

Returning to Zambia
After graduating from Anderson in 2018, Savannah continued her involvement with the school, then known as Chikondi School. The school is now named Hands of Hope Trust School.

She’s also been a teacher at Spearman Elementary School and recently married Luke Black, who runs his own marketing business. Luke says Savannah “stole his heart” when they met through a mutual friend. Like Savannah, Luke felt God was calling him to some kind of mission work. Now husband and wife, they both share a commitment to return to Zambia permanently in the summer of 2022.

Luke has joined the Hands of Hope board, taking responsibility for the budget. He also plans to use his marketing skills to tell stories about how God is impacting lives in Zambia.

“These are human beings that are souls, that are literally having their eternity changed. They’re having a future now with hope and... we’ve got to get these stories out there for people to hear about it, to hear about how good God is,” Luke said.

God continues to bless the work Savannah started, getting more people involved and opening up more opportunities for people to support their work.

“We just acquired a building that we're about to renovate and move into,” Savannah said. “We’ve been renting a house and used every square inch of it to keep kids in and have them go to school, so now we're renovating that. We also acquired land in the bush about two hours away. We started a church there and so we’re hoping to start a school there and serve this community.”

Savannah continued, “We are bringing people the gospel that have never heard of the name of Jesus before. We have a mission for sponsoring kids. We also have one for giving to the school and a one-time donation or monthly donations, and that’s to make sure at our school we feed kids, we give them everything, we don’t make them pay, but we still want to give teachers a livable wage.”

More information about Hands of Hope can be found on their website HandsofhopeUS.com.