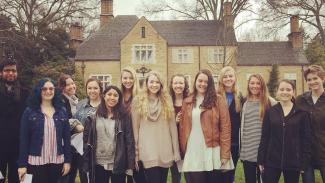 Tiny houses may be all the rage, but some at Anderson University see in the trend something more: the opportunity to meet a growing need for affordable housing in Anderson County.

Anderson Leadership Class 35 and the LOT Project are partnering to build the first tiny house in the city of Anderson, and its members have sought the talent of Anderson University School of Interior Design to make the house a home.

Leadership Anderson Class 35 members hopes the project will inspire a community-wide movement towards the adequate, affordable housing desperately needed for the revitalization of former mill neighborhoods across the county. The gentrification often associated with neighborhood improvement is something class members hope to avoid. To that end, after the Leadership Anderson class completes the tiny house project following its graduation in June, the LOT Project will take over management of the property with the goal of providing a home to a family in need.

The plans for the tiny house project were announced at Toast ‘N Topics, an event sponsored by the Anderson Area Chamber of Commerce and hosted at Anderson University on March 7, 2019. Members of Leadership Anderson and the LOT project spoke passionately about the vast impact the tiny house could have in the community’s low-income neighborhoods.

Leadership Anderson is a 10-month leadership development program devoted to strengthening and dedicating local community leaders. Robyn Sanderson, Associate Vice President for Student Development at AU, is one of 29 members of this year’s Leadership Anderson Class 35 who are leading the project.

“I am grateful that AU allowed me to represent our institution by serving as the AU representative in the Leadership Anderson Class 35,” Sanderson said. “Our Leadership class is deeply concerned about providing better alternatives for housing for a number of homeless individuals in our area, along with those members of our community that live in unsafe housing in the community. I sincerely hope it will also serve as a catalyst to bring other, more affordable options so that we can provide housing for all of our residents, especially the children of our community.”

Knowing first-hand the talent and skill of Anderson’s interior design students, Sanderson saw the tiny house project as an opportunity for them to meet a need in the community while gaining real-world experience. Sanderson reached out to her friend, Erica Bartels, an interior design professor at AU, to arrange for students to craft the interior of the tiny house.

Students Sarah Violette, Ashley Michalak and Joye Gaba completed the design plans for the tiny home as a homework assignment for Professor Bartels’ class, and they were anonymously nominated by their peers to present their plans to Leadership Anderson Class 35 as options for furnishing the tiny house. Their plans utilized affordable and accessible furniture, appliances and décor from brands including IKEA, Target and Wayfair.

“I think hands-on learning directly supports the education occurring inside the classroom. I’m grateful for professors, such as Professor Bartels, who are eager to provide real world educational experiences to our students,” Sanderson said. “The education that our students receive in the AU classrooms is top-notch and service-learning experiences, such as this one where interior design students crafted the interior of this tiny house, are phenomenal at helping to shape and model the student’s educational experience.”

City of Anderson Chief Building Official Alan Eklund has signed off on the architectural plans and a general contractor has been secured. The tiny home, which will be constructed on a quarter-acre vacant lot on 308 E Street, reportedly will be the first home constructed on the “alphabet streets” since 1985. Class members of Leadership Anderson Class 35 said the project is one of the most ambitious annual class projects Leadership Anderson has taken on since the Anderson Area Chamber of Commerce established the program in 1984.

The tiny house project will be significant in sharing hope to the alphabet streets. Sanderson said it provided the interior design students an opportunity to move the Kingdom of God forward with their skills and talents.

“People are valuable and worthy of love, and this is our expression of that,” said Andy Gibson, President of the LOT Project.

Leadership Anderson is now reaching out to the local community to raise the approximately $75,000 worth of materials & labor needed to complete the project. The class is aiming to raise funds by the end of April and complete construction by June. The class created a website where interested individuals, organizations, and corporations can learn more and donate online at andersontinyhome.com. Checks (made payable to Foothills Community Foundation with “LA35 Tiny Home” in the memo) may also be mailed to Leadership Anderson Tiny Home Fund, c/o Foothills Community Foundation, P.O. Box 1228, Anderson, SC 29622. The class will be facilitating opportunities for permanent recognition for significant contributions.