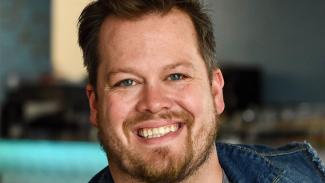 Josh Williams’ affinity for coffee began after a late-night trip to Walmart during his senior year at Anderson University.

He had never liked coffee, but he and his best friend decided they needed extra caffeine to make it through their final year of school. They set out to Walmart with one mission: become coffee drinkers.

They invested in a coffee pot, cheap ground coffee and a lot of creamer. That night would become the origin story of a coffee career for Williams, a 2010 graduate of the Anderson University College of Christian Studies.

In August, Williams opened Cohesive Coffee in Greenville. The new coffee shop is nestled in the corner of The Junction at Downtown Airport, an up-and-coming destination spot that houses restaurants, gyms and more.

Cohesive Coffee has been open for only four weeks, but it has already become a study space for students, a home for conversation and even a host for a Saturday morning yoga event. Williams’ vision is for his coffee shop to be a place that fosters community.

The space was a white-walled empty room when he signed the lease in January, and the architecture and design were inspired by his hope for his coffee shop to be a meeting place.

Natural light streams through the glass doors. A tile coffee bar spans the front of the shop, creating a spot for baristas to chat with customers while they carefully pour milk into hot lattes, shaping the cream into a leaf-like pattern. Soft music plays in the background. Couches and tables abound to gather with friends.

“It’s a welcoming place,” Williams said. “There are places to study. We’ve had small groups. It’s warm and inviting.”

Williams’ idea for his coffee shop has gradually taken shape since he graduated nine years ago. After college, Williams worked as a worship pastor at churches across the state. During his time in ministry, Williams led worship for a missionary conference in Africa.

There, Williams met a missionary who showed him the impact a good cup of coffee could make. They quickly bonded over a pour-over cup of Parisian coffee.

“On one hand, it was the best cup of coffee I had ever had in my life,” Williams said. “On the other hand, I saw this really cool community that could happen around coffee.”

When he returned to his home in Greenville, he immersed himself in the specialty coffee scene that was emerging in the area.

A few years later, Williams decided to step away from vocational ministry. He and his wife prayed about their next steps, and they soon landed on coffee as a new business venture.  As they explored their idea for Cohesive Coffee, Williams was approached about opening his shop in The Junction.

“God was all over it,” Williams said.

He quickly began making his plans a reality. For months, Williams has been preparing for the coffee shop to open—designing, perfecting his menu and seeking advice from other coffee shop owners.

Every cup of coffee at Cohesive Coffee has a story behind it. Williams said that, as a small business, everything purchased at his coffee shop directly supports his family and his employees. Cohesive Coffee also partners with other local businesses they believe in, including Cooperative Coffee for the coffee beans and Exchange Co. for pastries.

Williams is thrilled that the first few weeks have been busy. He views his coffee shop as a place to love people through kindness and great coffee

“We are so proud of Josh for his entrepreneurial spirit and the vision for what he is trying to do with this space in Greenville,” said Jason Rutland, associate vice president for alumni and parent engagement. “The hospitality that is shown and the environment that they have created is worth a trip.”

AU not only made Williams a coffee drinker but also shaped him as a person. He said Dr. Ryan Neal, AU’s provost and Williams’ professor at the time, challenged him to use his passions and talents to serve his community. Williams learned to take his ideas and go somewhere with them — which is precisely what he has done at Cohesive Coffee.

“Anderson really pushed me from a super shy kid to somebody who stepped out and realized I had something to offer,” Williams said.

Williams enjoys catching up with his fellow alumni and watching the amazing things they have accomplished since graduation. He is still best friends with Eli Rhodes, who accompanied him to Walmart for his first coffee pot over nine years ago.

Though running Cohesive Coffee keeps him busy, Williams enjoys traveling and spending time outside with his wife, Dorothy, and their two kids, ages two and five.

Williams is excited about the future of Cohesive Coffee, and he hopes it will be a new favorite coffee hub for AU students.