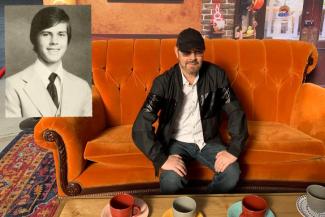 James Michael Tyler wasn't just Gunther, the lovesick barista on 'Friends.' He was a Trojan, too...and a cherished member of the AU family.

Most everybody knows James Michael Tyler from his recurring role as Gunther in the long-running hit sitcom "Friends."

But he was also a member of the Anderson University family.

Tyler, an Anderson alumnus, passed away Oct. 24 after a three-year battle with cancer. Late in life he used his celebrity status as a platform to raise awareness of prostate cancer. His older sister, Linda Tyler Clark, is still at Anderson University, where she serves as the administrative assistant for the Center for Innovation and Digital Learning (CIDL).

“When he got to California they called him James Michael, but he’s Mike to us,” Clark said of her brother, who was 12 years younger than her. When their parents passed away in Mississippi in 1973, Tyler came to live with Linda, who by then was married and living in Anderson. She described him as “more on the reserved side,” much like his Gunther character.

“He had a funny side to him, too,” Clark recalls. “He would play tricks on my girls. They knew him as a brother because he came to live with us when my first child was 18-months old and my second one hadn’t been born yet. He always knew how to make you laugh and was loved by so many.”

“He started seventh-grade when he moved here, so he went all the way through the Anderson schools—McCants Middle, T.L. Hanna High, then Anderson,” said Clark. “He liked geology. My husband, Dr. James W. Clark, was on the music faculty here for 41 years and was a surrogate father to Mike, so Mike got interested in music as well. He was in the band and chorus at Hanna. He was also a member of the choir at Trinity United Methodist Church”

Known by '"Friends" fans as the somewhat quirky barista at Central Perk who had an ongoing crush on coworker Rachel Green (Jennifer Anniston), Tyler actually landed his famous role after he was hired as an extra. The director who hired him wanted somebody who could actually operate a cappuccino machine, then he moved into a more prominent role. But before he showed off his barista skills on television, Tyler was a student worker for longtime chemistry professor Alice Fay at Anderson.

After graduating from Anderson in 1982, Tyler went on to further his education at Clemson University and became involved in theatre. He ultimately moved to California with some friends from Georgia, seeking to break into show business. They landed in Los Angeles, sharing one roof and expenses—pretty much like the "Friends" characters did in New York.

Clark and her brother saw less of each other in recent years, but kept in touch almost daily by phone, email and text. Also, they got together during a 2015 visit Tyler and his wife Jennifer made to Clemson. Their sister, who lives in Knoxville, Tennessee, also made a surprise trip to see him.

While there will be a memorial service for Tyler in California, Clark says that at some point in time family members in the southeast will get together to celebrate his life.