9/11 Remembered: Where Do You Turn When the World is Falling Down Around You? 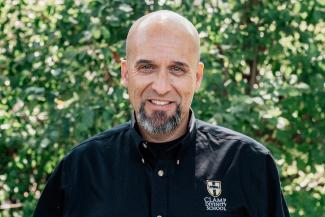 Dr. Tim McKnight, associate professor of missions and youth ministry at Anderson University, shares his thoughts on the twentieth anniversary of the 9-11 attacks and his experiences of that day.

Where do you turn when it seems that the world is falling down around you?

This question carried new meaning 20 years ago as I stood in my small seminary apartment, eating my breakfast and watching live video of a breaking story of what reporters first thought to be a private plane that crashed into the North Tower of the World Trade Center. Although the damage and resulting fire looked more extensive than a private plane, I proceeded with my schedule that day of writing my Ph.D. prospectus with the hope of beginning my dissertation as a student at The Southern Baptist Theological Seminary, where I was pursuing a degree in evangelism, missions and church history.

Then, Flight 175 crashed into the South Tower. I knew our country was at war.

I felt a mixture of anger, fear and resolve as I walked to my closet and began to dress in my battle dress uniform. At the time, I served as an infantry battalion chaplain in the Kentucky Army National Guard. I knew my unit was high on the list for a call to active duty and would be one of the first to deploy if our country went to war. I was not wrong in my conclusion.

The attack on the Twin Towers and the Pentagon showed our vulnerability. To counter the threat of Al Qaeda in the United States, the government began activating and deploying National Guard units for Operation Noble Eagle, the homeland defense mission to counter the terrorist threat. My battalion began mobilizing elements and sending them around the country starting September 18, 2011.

While my battalion commander and I traveled back from deploying one of our companies, he asked me, “Chaplain, are your bags packed?” I replied, “Sir, you know my bags are always packed.” He simply said, “That’s good because you’ll need them soon.” “Roger that, sir,” I replied, knowing that I would deploy within weeks.

Within roughly a month after the terrorists attacked our country, my headquarters deployed on Operation Noble Eagle to help secure the installation and personnel at Fort Knox, Kentucky, and to assist the post in mobilizing other Guard units deploying on both Operation Noble Eagle and Operation Enduring Freedom (the overseas mission of the Global War on Terrorism). We would only stay at Fort Knox for a month before receiving orders for Operation Enduring Freedom. 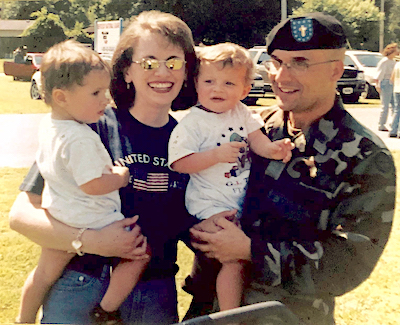 Our orders for Operation Enduring Freedom involved a force protection mission to Europe. Al Qaeda had made Europe an operational area and was seeking to attack American personnel and installations there. We would be part of a brigade-sized task force, Task Force Santa Fe, consisting of other soldiers from Kentucky, Illinois and Kansas, that would protect Americans in Germany, Holland and Belgium.

As I kissed my wife and six-month-old twins goodbye the morning I left for Europe, I had no idea what the future held. Just three months prior, I was preparing for my dissertation and graduation in December of 2001. Now I was deploying with my unit to counter a real threat to Americans.

What do you do when your world is turned upside down? Where do you turn when the storms rage around you and the future is uncertain?

When we landed in Germany in January 2002, we found out that our parent unit, the First Armored Division, was on alert to prepare for combat operations in Iraq. We were tasked as the follow-on force for that division. So, our uncertainty just seemed to increase.

Shortly after arriving and receiving this information, I attended a prayer breakfast where the worship leaders sang a song by Steven Curtis Chapman that came out a few years before the deployment entitled, “Be Still and Know.”

The song refers to Psalm 46:10-11, which states, “’Be still, and know that I am God. I will be exalted among the nations, I will be exalted in the earth!’ The LORD of hosts is with us; the God of Jacob is our fortress.” (ESV)

As I listened to the song and reflected on these two verses, I was comforted by the reminder that God was with me even though I was deployed on Operation Enduring Freedom. He would never leave me or forsake me. If I turned to Him during my deployment, the Lord would be a refuge for me.

I also understood that not only was God with me, but He is also in control—He is sovereign. Even though I didn’t understand the answer to the question, “Why?” I knew that God is infinitely loving and infinitely good. I could trust Him to work His perfect will in my life no matter the circumstances. I could trust Him to have control over the storm.

The words “be still” in this Psalm also reminded me of another passage in Scripture. In Mark’s Gospel, Jesus is on a boat with the disciples when a storm suddenly blows onto the Sea of Galilee and threatens to capsize the boat. The frightened disciples wake a sleeping Jesus. Describing Jesus’ response, Mark writes, “And he awoke and rebuked the wind and said to the sea, ‘Peace! Be still!’ And the wind ceased, and there was a great calm.” (Mark 6:49 ESV)

Like Jesus calmed the storm that day, he calmed the raging storm inside me during those first days of my deployment. He granted me peace during the storm. Christ did not take the storm away, nor did He explain why the storm was happening. He provided His presence and His peace amid the storm.

Twenty years later, we face storms again in our nation. We are experiencing a global pandemic. We’ve recently watched the Taliban return to power in Afghanistan. It sometimes seems that the world is spiraling into a chaotic tempest.

Where do you turn when the world is falling down around you?

What storm are you facing right now?

When we focus on Christ and listen for His voice during these storms, we hear Him say again, “Be still.”

Dr. Tim McKnight is Associate Professor of Missions and Youth Ministry and Director of the Global Center for Youth Ministry at Anderson University. He is lead pastor and planter of a new multiethnic church plant, Mosaic Church of Anderson; and the author of Engaging Generation Z: Raising the Bar for Youth Ministry (Kregel Ministry 2021), as well as the editor of Navigating Student Ministry (B&H Academic 2022). Read more about Dr. McKnight.