Last summer, Anderson University teamed up with AnMed Health to organize an intensive camp experience for students seeking a career in medicine.

The process of entering medical school is daunting. On average, fewer than half who apply get accepted.

Wanting more students to succeed, Anderson University has teamed up with AnMed Health to organize an intensive camp experience with the goal of putting the odds more in favor of students seeking medical careers.

This first Pre-Med Boot Camp took place on campus this summer. An intensive two weeks of preparation for 18 students from seven institutions across Upstate South Carolina, the camp gave students a glimpse of the medical school experience. Students learned what it takes to gain an edge in the highly competitive process of entering medical school.

Faculty from the Anderson University College of Arts and Sciences and College of Health Professions, along with AnMed Health physicians, conducted the camp.

The students shadowed physicians in a variety of specialties at AnMed Health’s medical facilities. They were also given real-life treatment scenarios at the Anderson University Center for Medical Simulations, learning with human simulators as well as from nursing faculty who volunteered to play the role of patients. A unique aspect of the bootcamp was getting to work in Anderson University’s cadaver lab—a facility rarely found anywhere outside of a medical school. There were also workshops giving students an in-depth look at the interview process.

Dr. Carrie Koenigstein, associate dean of the College of Arts and Sciences, is excited about how Anderson University faculty and AnMed Health physicians came together to make the camp
a success.

“One of the whole points for this is to demonstrate Anderson University is a leader in healthcare education. We are working with some of our peer institutions to support long-term medical care in the Upstate to get the right students into the right schools. Hopefully they’ll come back and serve in the Upstate as excellent physicians,” Dr. Koenigstein said. “We had anonymous surveys and had them discuss with us how to improve the camp. They’ve all been just blown away with the amazing opportunities they’ve had to shadow, do workshops, to interview practice—that was one of the highlights.” 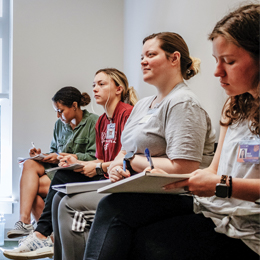 “This pre-medical boot camp offers 80 hours of shadowing, work- shops, medical school prep sessions and introductions to our four medical schools in South Carolina,” said Dr. Stoney Abercrombie, founding director of medical education at AnMed Health. “Dr. Koenigstein and I began planning this inaugural camp several months ago. The unique and strong relationship between Anderson University and AnMed Health provided us a solid foundation upon which to construct this camp. One of our impetuses for this camp is to provide opportunities for students at universities in Upstate South Carolina. The reviews by the students were overwhelmingly positive. Their suggestions for improvements will make next year’s boot camp better. Our goal is to ensure that these students have a strong chance to enroll at one of our four medical schools. My goal is that they will return to Upstate South Carolina to practice their medical specialty one day.”

“The magnitude of things we are required to do and learn, it’s a lot,” said camp participant Xavier Noel Pin Harry. Growing up in Hong Kong and Indonesia before moving with his family to the United States, he saw people suffering with diseases and living in poor conditions. This impacted Harry to seek a profession where he could help others move past their suffering.

“It was an action-packed week and a half. It was wonderful but a little bit overwhelming. That’s what medical school is like—you’re constantly on your feet, you’re constantly running,” said camp participant Elizabeth Keller. “The fact that I handled it relatively well also shows me that maybe I am cut out for this. This has taught me that this is what I want to do and I have little doubt anymore.”

“For me, I think the human body is too divinely created for it to all be by accident. There’s a Creator who put time and energy into this, so for me, I want to take care of that creation—just to show His love through my work,” Keller said.

Ciera Carter, whose parents are both veterinarians, hopes to practice medicine in a rural area somewhere, offering care to those with limited access to proper healthcare.

“Part of why I want to work with rural medicine is gaining a unique relationship with my patients,” Carter said. The Pre-Med Boot Camp “has been probably the best resource I’ve had so far. Just the exposure to different physicians and to ask them as many questions as we can. Almost every day we have a panel where we can ask people questions, whether they’re medical students, surgeons, residents... just the ability to meet so many people in this field, it gives you a better perspective of what medicine really is.”

Andrew Thumpston feels blessed to be able to shadow various physicians and be exposed to a variety of hands-on experiences. The son of a minister, Thumpston is also exploring medical mis- sions as a future possibility, either on a short- or long-term basis.

“I’m open to whatever field I can get into. I’m particularly drawn toward general medicine. I like the idea of forming relationships with patients—not just fixing bad issues, but helping them prevent serious issues that could affect their lives,” Thumpston said.

The first college student in her family, camp participant Madison Harmon feels that African Americans and other students of color are underrepresented. She wants to help reverse that trend.

“I haven’t seen many doctors who look like me or come from my ethnic group in healthcare, so I really would like to come and represent people like me to show that you too can do this,” said Harmon, who hopes to enter emergency medicine. While the camp has been challenging, Harmon has felt encouraged by Dr. Koenigstein and others wanting her to succeed.

“The workshops have been really great. It’s great to see the different areas of medicine that I personally haven’t been exposed to yet,” Harmon said.

Laney Gaston has played sports most of her life, and with that, has had her fair share of sport-related injuries. Coming to the camp soon after undergoing shoulder surgery, she has firsthand experience observing doctors and other medical staff, reinforcing her desire to pursue medicine. Although the number of women becoming doctors has been traditionally low, there are signs that trend is reversing. Gaston wants to be part of that trend.

“Honestly, to be a woman entering medicine, it’s a great feeling,” Gaston said. “I think having the opportunity to not only get my education in undergrad, but also be a competitive applicant for medical school is something that 100 years ago, 50 years ago you wouldn’t imagine. That to me is something so special about our generation, that we are full of strong, independent women.”

“There was a huge number of AnMed Health physicians who went out of the way to let people shadow and work with them, and do workshops and lunches to answer questions,” Dr. Koenigstein said.

There are plans to offer the Pre-Med Boot Camp again in 2023. 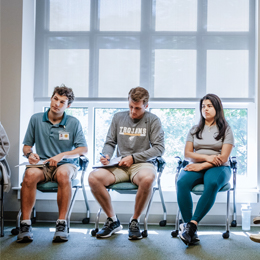 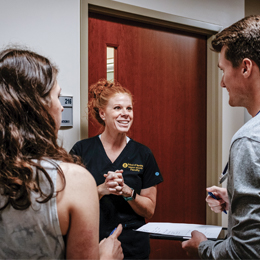 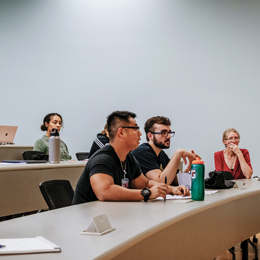 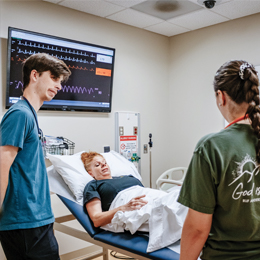