Senior Dillon Carpenter opened the season with a 21-game hitting streak and finished the shortened season ranked 11th in the South Atlantic Conference with 21 RBI, while newcomer Nick Vella stood third in the SAC with a .419 batting average, while also ranking in the top–10 in six other offensive categories. Carpenter and junior Chandler Castleberry each reached base safely in all 22 contests before the season came to an abrupt halt.

Senior Christian Carpenter shared the league lead with six saves. The Polkton, N.C., native surpassed former AU standout Nick Wates (2000-03) for most career saves with his 20th career save in a 5-3 win over Lenoir-Rhyne in late February.

Sophomore Lucas Smith earned back-to-back SAC Pitcher of the Week honors in February, becoming the first Trojan pitcher to capture the accolade since standout Christian Carpenter garnered the award twice last season. Over the two-game span, Smith scattered eight hits over the 18 innings while allowing just one run. He struck out 22 batters and walked just two. The native of St. Petersburg, F.L., finished the shortened season tops in the SAC with his two complete-game gems, while pacing the league with 47 strikeouts. Smith was tied for second in the conference with four wins and was one of only two hurlers in the SAC to toss two complete games this season—and the only one to post a nine-inning complete game.

Senior right-hander Alex Medlin made 23 career appearances on the mound over the past three seasons, including seven during the 2020 season, while tossing 32 career innings. The native of Seneca, S.C., fanned 20 batters while issuing just 16 walks. He made a career-high nine appearances during the 2019 campaign and notched a 2.50 ERA in seven appearances during the 2018 season. Outfielder Cody Adams, a transfer from USC Salkahatchee, started 43 games as a junior and led the team with 10 doubles in 2019, while notching a pair of triples and ranking fourth on the team with a .382 slugging percentage. A native of Saluda, S.C., Adams scored 38 career runs and posted a dozen multi-hit games, including three hits on four occasions and closed out the 2019 season on a seven-game hitting streak. He recorded five multi-RBI games and wrapped up the abbreviated 2020 season by reaching base safely in his last eight straight games. Senior Brent Reynolds, a T.L. Hanna product, made 47 career appearances on the mound, including 15 starts. He has four career victories, including one last season and also captured his first career save last year in AU’s wild 16-12 home victory over Coker at Memorial Stadium. Reynolds worked nearly 96 innings during his career and recorded 68 career strikeouts. The left-hander owned a career-best 1.74 ERA in 12 appearances last season.

Outfielder Daniel Blazejewski saw action in 25 contests over the past two seasons and was hitting a career-high .294 at the end of the 2020 campaign. The Phillipsburg, N.J., native has notched four two-hit games during his career and drove in eight runs, including a career-high three RBI against King last season. Blazejewski posted a career-high four-game hitting streak in February that included a pair of doubles.

Matthew Overton saw action in 97 games over the past three seasons, while drawing a starting nod in 90 contests. The Spartanburg, S.C., native owned a .261 career batting average and finished the 2020 season with a career-best .618 slugging percentage, while notching 18 career multi-hit games and 17 multi-RBI contests. He belted 17 career home runs, including a pair of grand slams in the 2018 season and one against Wingate during the final conference series in March, 2020.

Cameron Hall, a native of Spartanburg, S.C., and a transfer from Spartanburg Methodist College, made 28 relief appearances on the mound over the past two seasons for the Trojans. The right-hander earned a save in the home win over Mars Hill a year ago with three innings of relief. Hall recorded 34 career strikeouts and walked just 11 batters in more than 38 innings of work. He did not issue a free pass last season and owned a 3.52 ERA in 2020, while holding opponents to a .250 batting average. 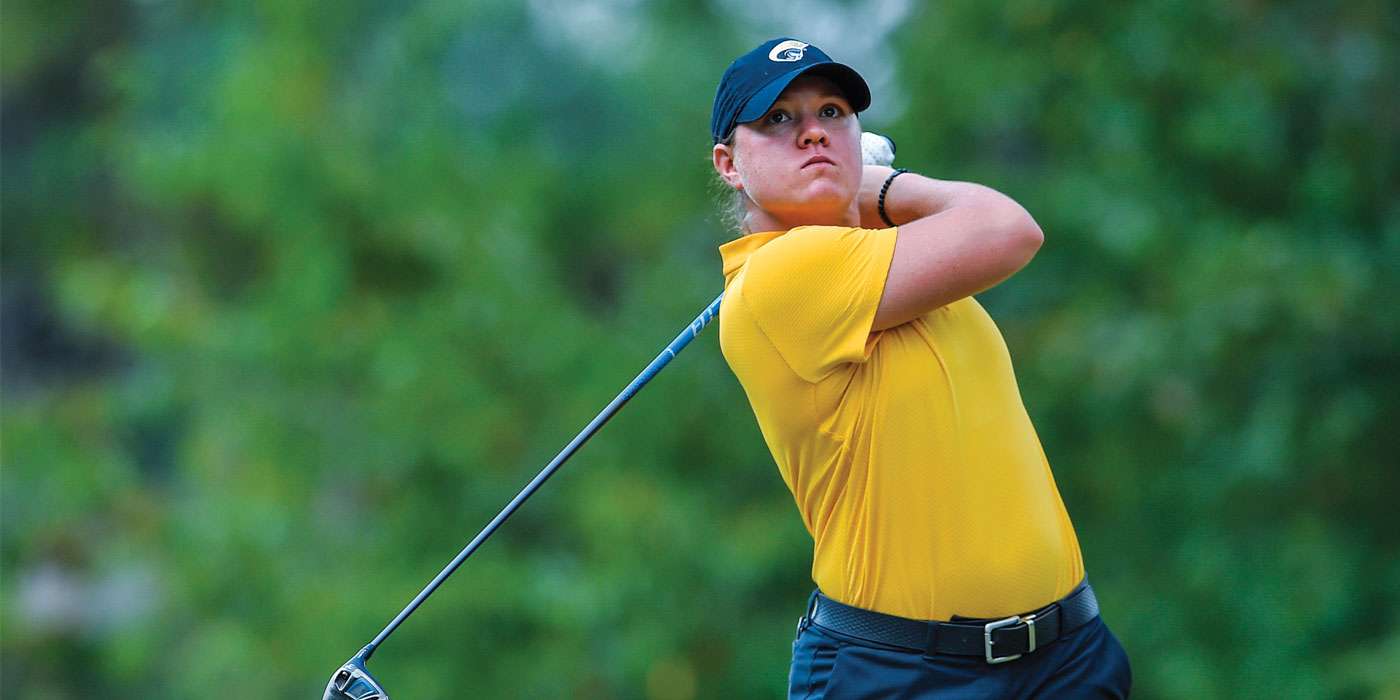 The 2019-20 campaign may have drawn a curtain on one of AU’s most accomplished golfers, senior Kate Hill. The native of Clemson, S.C., earned postseason South Atlantic Conference honors in each of her first three collegiate seasons, while capturing Second-Team All-South Atlantic Conference honors twice after being named South Atlantic Conference Freshman of the Year in 2017. She was twice named to the SAC All-Tournament Team (2018 & 2019) and as a junior, Hill equaled the fourth-best three-round total in SAC Tournament history and finished in a tie for fifth place at the 2019 SAC Championship. Hill won the 2018 AU Invitational, while claiming twenty top-10 finishes in her career, including a second-place finish at the 2017 AU Invitational and a third-place finish at the 2018 SAC Championship. 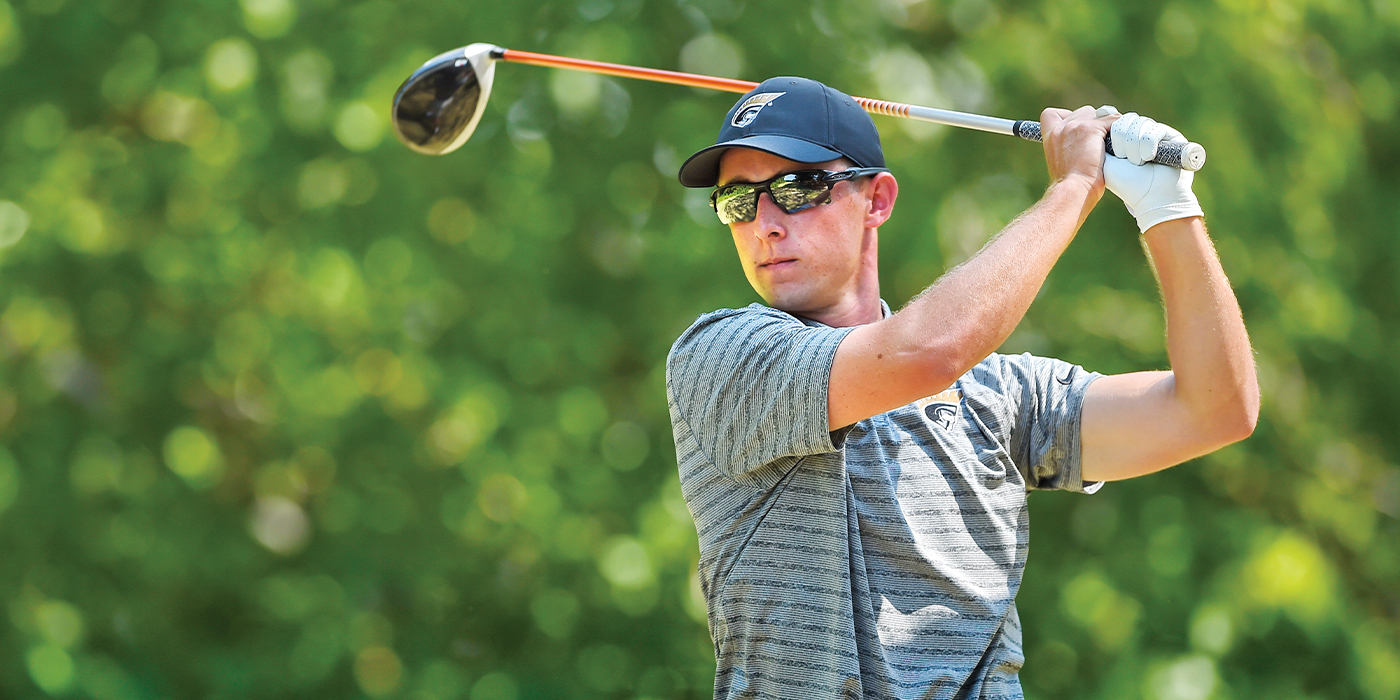 One of three seniors on Head Coach Danny Neal’s roster, Jake Miller, was second on the team last season with a 72.60 unadjusted stroke average. The Anderson, S.C., native owned a pair of fifth-place finishes, while finishing sixth at the Donald Ross Intercollegiate and eighth at Lincoln Memorial’s Spring Kickoff Intercollegiate in February.

Miller, who was named the SAC Men’s Golf Scholar-Athlete of the Year and AU Male Scholar-Athlete, has been a game-changer during his stellar collegiate career. After electing to play for his hometown school, Miller earned First-Team All-South Atlantic Conference accolades following his junior year and was named to the 2018 SAC All-Tournament Team after finishing as runner-up at the South Atlantic Conference Championship. He led the team in scoring average both as a sophomore and as a junior, while firing a career-low 67 on four occasions. Miller led the Trojans in 15 tournaments during his career, including all five spring events during his junior season. He posted 18 top-25 finishes, including a dozen top-10 performances.

Senior Brady Cox competed in 10 tournaments, while posting a 77.18 unadjusted scoring average during his sophomore season and firing a career-best 71 in the second round of the 2017 King Invitational. He also carded a 73 in the first round of the 2017 Donald Ross Intercollegiate. The Anderson, S.C., native captured a career-best 18th place finish at the 2018 AU Invitational and also garnered a pair of top-25 finishes. Fellow senior Drake McAlister recorded a pair of top-20 finishes, including a share of 15th place at the 2018 Myrtle Beach Intercollegiate. The Easley, S.C., native fired a career-best 72 in the opening round at Myrtle Beach and nearly equaled it with a 73 in the second round of the King University Invitational. 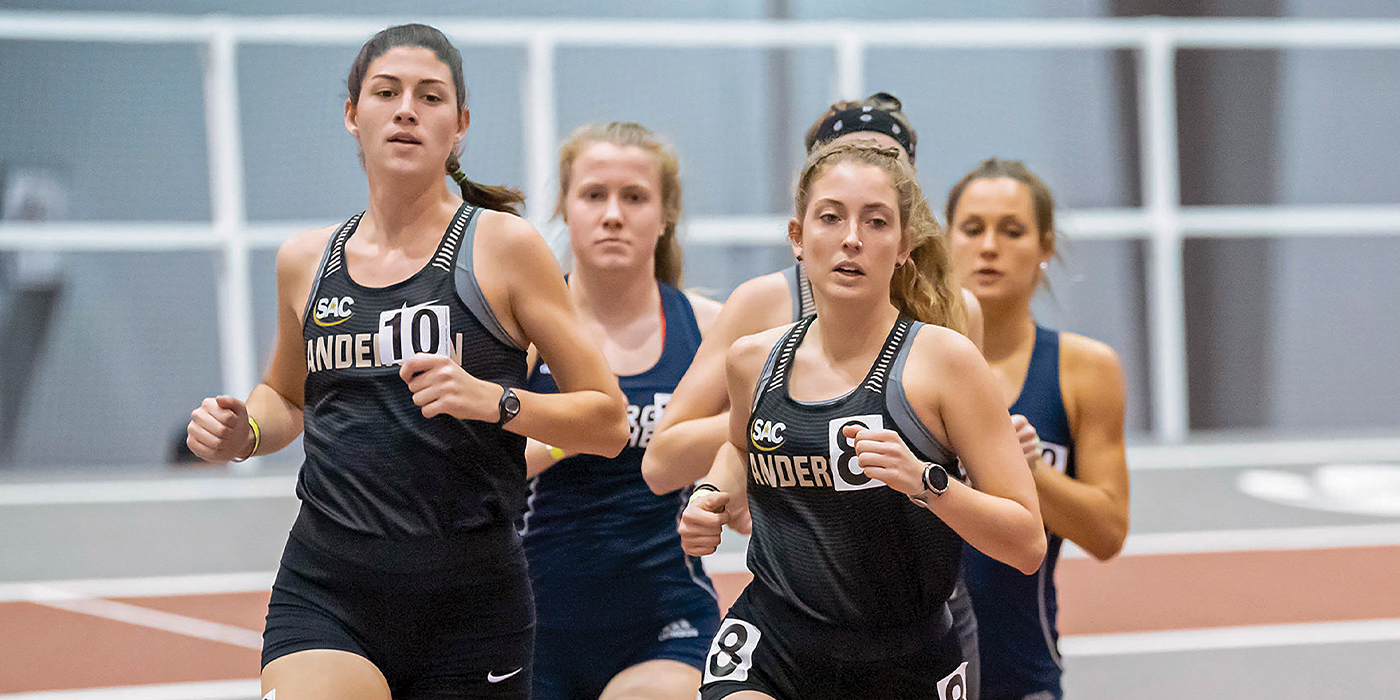 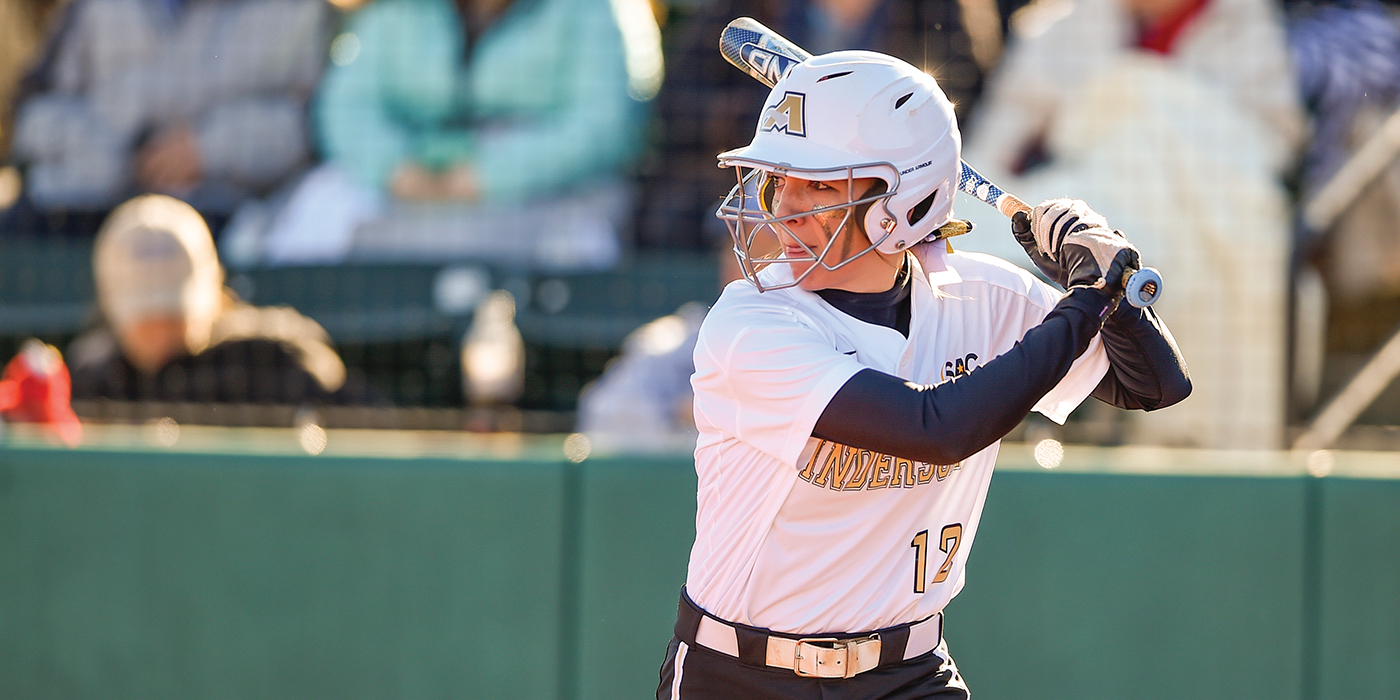 Anderson University head softball coach Tommy Hewitt’s Trojans dropped four of its first seven contest before reeling off an impressive 13 straight wins, including a doubleheader sweep of then league-leading Lincoln Memorial. The win streak marked the Black and Gold’s longest since the 2015-16 season.

For the shortened season, senior Meghan Majeski was hitting .369, second-highest on the team and had swiped 10 bases which ranked third in the SAC. For her career, Majeski stole 76 bases, which ranks second on AU’s all-time steal list and is just eight shy of the top spot. Majeski also ranks sixth all-time with most runs scored and tied for 10th in career batting average (.333).

Senior Mattie Hamilton drove in 25 runs, which was tied for fourth in the SAC and second on the team. Hamilton posted a .328 batting average with five doubles and four home runs to her credit. Hamilton is ranked in multiple categories in the AU record books, including RBI (5th) Runs (7th), Slugging Percentage (7th), Total Bases (9th), Home Runs (6th), Doubles (T-7th) and Batting Average (8th).

Senior hurler Kayla Pepper, who was named AU Female Scholar-Athlete of the Year last April, earned eight wins in the circle last season, while pitching a team-leading 62 innings. Pepper pitched nine complete games while striking out 72 batters. The southpaw from Anderson, S.C., ranked third in the SAC in wins last season and sixth in the SAC with a 1.81 earned run average. In less than three full seasons, Pepper ranks in the top-10 in earned run average, strikeouts, wins and innings pitched in the school record books. 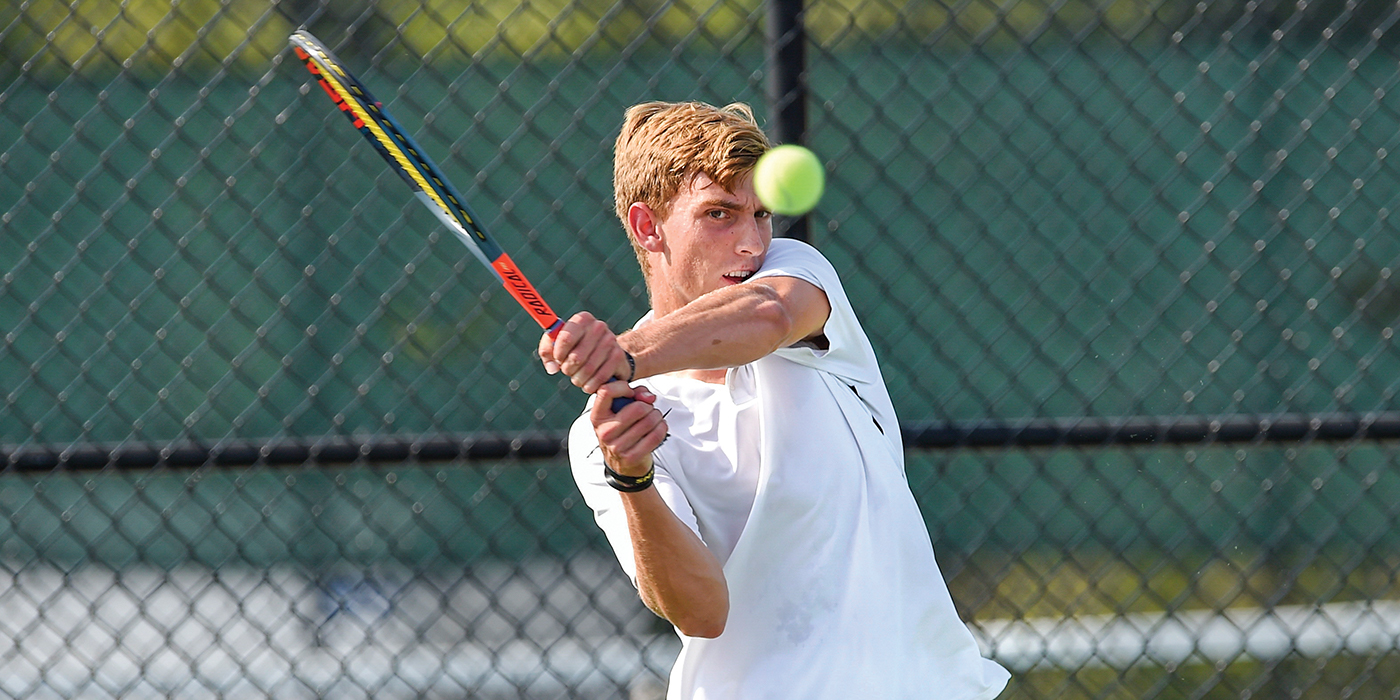 Senior Ignacio Bidegain, who was named AU Male Athlete of the Year at April’s Honors Celebration, lost only one match in both singles and doubles actions out of 15 team matches last season. Bidegain played in the No. 1 slot for singles play and the No. 2 position for doubles action and earned SAC Player of the Week after the Black and Gold’s final week of action. The native of Buenos Aires, Argentina, was a SAC First Team selection (singles) each season, while garnering national recognition for his stellar play.

Senior Preston Morpeth posted a 7-4 singles record and an 11-1 doubles slate during the 2020 season. Morpeth’s steady play over his career played a huge role in the Trojans’ success. Senior Jeffrey Dayton went 7-3 in both singles and doubles action last season. Dayton earned SAC First Team honors (doubles) following the 2017 season. Senior Jerry Price posted a 2-0 singles record in the No. 3 position, while going 3-2 in doubles play. In October at the South Carolina Men’s Collegiate Championships, Price was presented the Big Jim Russell Award, which is awarded to a player based on his sportsmanship, attitude on and off the court, and participation.

Senior Hank Sartain won both of his singles and doubles matches he played in during the 2020 season. Sartain was an active participant on the Student-Athlete Advisory Committee (SAAC) and served as part of the Executive Leadership Council. Senior Jordan Crooks earned a victory in singles action, blanking his opponent, 6-0, 6-0, while dropping just one set, 8-1, in the number three slot in doubles play. 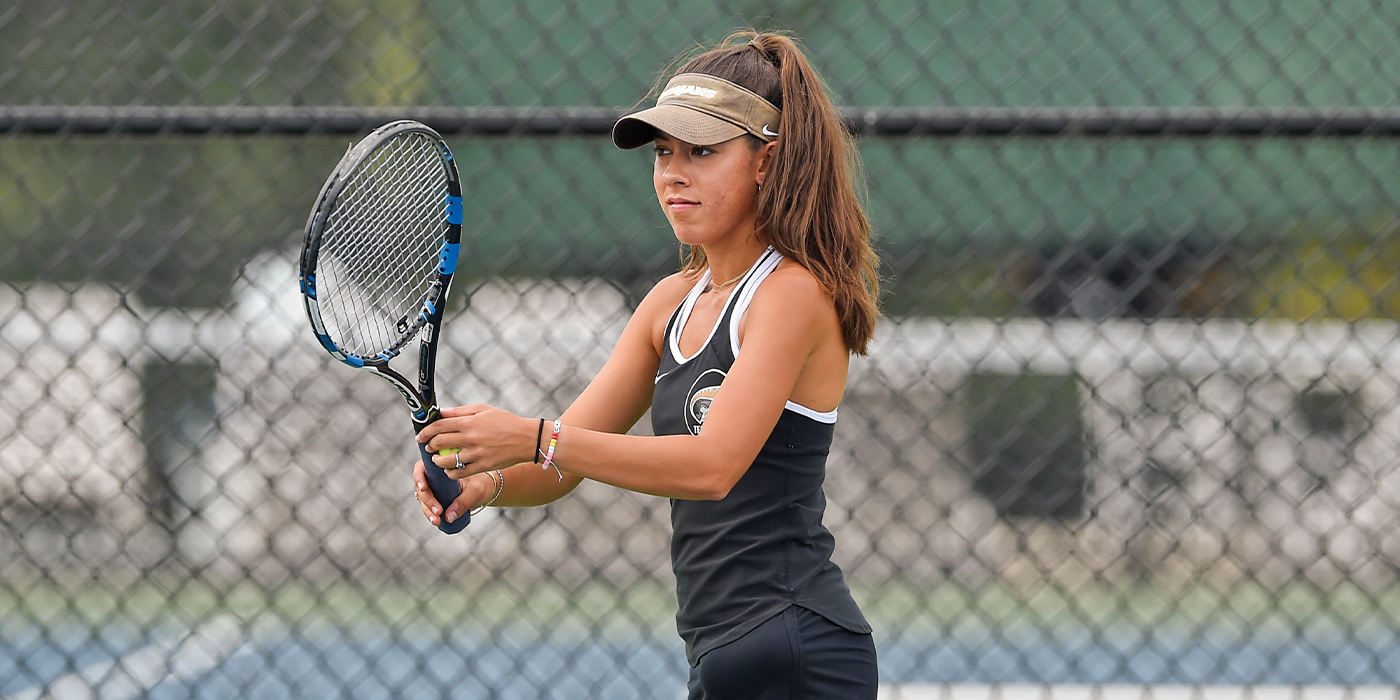 Senior Mirna Curcic posted a 10-2 overall singles record and an 8-3 doubles mark to help lead the Black and Gold to 12 victories a season ago. Senior Gabrielle Dacuba defeated her USC Sumter opponents in both the singles and doubles portion during their February matchup. 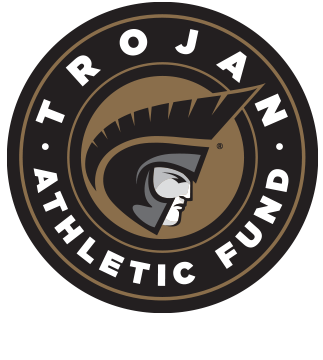 We enthusiastically welcome the opportunity for providing our student-athletes an experience like no other in the nation. It's built upon Anderson University's mission of being a diverse community that is Christ-centered, people-focused, student-oriented, quality-driven, and future-directed. Your partnership in providing this experience through the TAF is critical to our success and your investment will make a great impact and will inspire us to even greater heights.