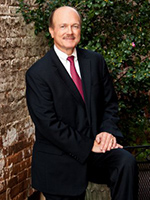 A retired environmental engineer and nonprofit executive, Robert Rainey has served the Anderson community and the State of South Carolina in many capacities over the past 40 years and is a member of the Anderson University Board of Regents and emeritus member of the Board of Visitors.

Robert was born on December 7, 1952, in Anderson to Dr. John Faulkner Rainey and Caroline “Callie” Stringer Rainey. He graduated from The McCallie School, Washington and Lee University and earned masters degrees from The Johns Hopkins University and Clemson University. After a career in environmental engineering, he was founding board member and later president of the Foothills Community Foundation based in Anderson. He serves as a trustee of AnMed Health and Brookgreen Gardens. He is chairman of The Stringer Foundation and the Callie and John Rainey Foundation and is a trustee of the Gambrill Foundation.