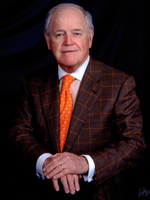 In 1958, Jack Shaw started his company, Jack E. Shaw Builders, using the tongue-in-cheek tagline, "The House that Jack Built." Little did he know, he would build much more than houses.

Over the years, Jack Shaw has proved himself to be an effective and successful businessman, a dedicated civil servant, a loving father and husband, and most importantly, a humble servant of Christ. He has built a legacy of faith, and lives a life predicated upon generosity and service.

Jack was born and raised in the Upstate of South Carolina by William Erby and Mittie Saxon Shaw. After graduating from Emmanuel College in Franklin Springs, Georgia, as well as Elon University in Elon, North Carolina, he returned to Greenville.

Today, Jack is the founder, Chairman of the Board, and President of Shaw Resources, Inc., a residential and commercial real estate development and property management corporation that serves the Upstate, pockets of the Lowcountry and North Carolina, and areas as far as the state of Oklahoma.

Over the course of his career, Jack has served as a Corporate Director of the BB&T Corporation, now Truist Financial Corporation; Director and member of the Executive Committee of the United Carolina Bancshares; Vice Chairman of United Carolina Bank of South Carolina; and Director of the Bank of Greer. He was elected as a trustee for the Greenville Health System, now Prisma Health, and served as its Board Chairman for a year of his term.

In addition to his civic and professional contributions, Jack has served on the Executive Committee of the Southern Baptist Convention, as a trustee of the Southern Baptist Foundation, and served on the boards of World Medical Missions and Samaritan's Purse. In 2009, he authored and published his first book entitled, "Little by Little: A Journey to Success and Significance FOR Life." Jack continues to minister to his community and local church body, where he co-teaches weekly Sunday School in Taylors, South Carolina.